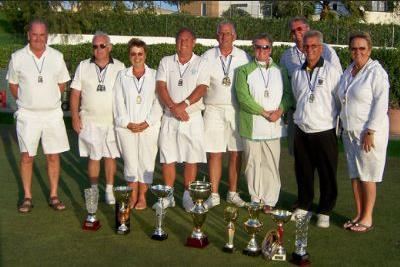 Members of the Santo António bowling club in Alvor have dominated competitions across the Algarve this year finishing first, third and fourth in the nine team Saturday league and taking home the titles of mid-week league and the Cameron Cup while winning all six of the Bowls Inter Club Algarve Championships.

Meanwhile, one member of the club has shone throughout the season, John Jones, who played in five of the finals at the culmination of five months worth of domestic competitions held on March 28.

John Jones was to take part in five of the scheduled events beginning with one match on Friday, March 27 with he and Maria Jones beating Lesley and Brian Walker by 23 shots to 21 over 21 ends in the conjugal pairs. John then paired up with Mike Browning in the drawn pairs to play and beat Anne Davey and Ken Nelms by 24 shots to 10.

Lesley and Brian Walker came back to play in another pairs match, this time being played with only two woods per player and beat Paul Johnson and Alan Clarke by 20 shots to 15.

It was then the turn of the ladies to take centre stage with Sheila Currall taking an early lead, however, Joan Worrall made a strong come back winning the next nine ends and taking home the prize with a final score of 21 shots to 14 overall.

The last match before lunch was the Championship pairs and Paul Johnson and Alan Clarke won the title beating Frances and Alan Reynolds by 20 shots to 16.

John Jones was back on the green after lunch beating Chrissie Laskey by 22 shots to 13 in the two wood singles before dismissing Beryl Swift by 25 to 12 in the handicap singles followed by John beating challenger John Dent by 22 to 16 in the men’s singles.

The final game of the day saw John Jones back in action in the fixed jack game played against Paul Johnson and yet again John came away with the title winning by 108 to 82.

In total, John Jones sent more than 400 woods down 120 ends winning a massive five titles on five different rinks over the final days of the competition.