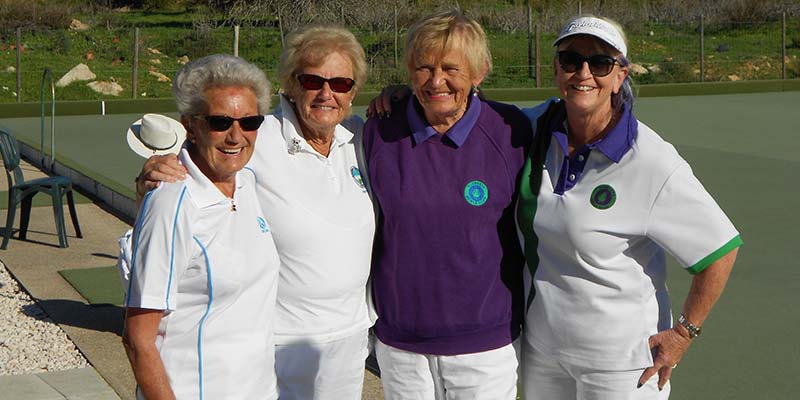 Welcome back to the second half of the bowling season after the beautiful weather over Christmas and New Year.

Monday, January 7 saw some of the Interclub Competitions taking place, with Evelyn Oliver and Rene Berbridge being beaten by Helen Stokes and Debbie Stewart (left to right in picture) at Floresta. Many of the competitions are still to be played but those remaining competitors are closing in on the semi-finals, which are at the end of February.

Tuesday, January 8 was another crisp, beautiful day for the next leg of the Cameron Cup Competition. Only two more games to decide the winners. Valverde won all six points from Balaia, whilst Albufeira took all six points from Alvor, and Floresta won four points from Pedras. This changes the table with Albufeira at the top with 14 points, but Alvor, Valverde, and Pedras all chasing closely behind on 12 points, Floresta have four points and Balaia are yet to score any points.

In League B, Alvor Rooks won three points from Floresta Huntsmen who won five points, Alvor Amigos were the resting team this week, Valverde Vikings won three points from Alvor Greens winning five points, whilst Balaia Whalers only took one point from team mates Balaia Pods winning seven points. This keeps Balaia Whalers at the top of League B on 31 points, with Alvor Amigos and Alvor Greens chasing closely behind on 30 points each. Alvor Rooks are the team holding up the league on 21 points.