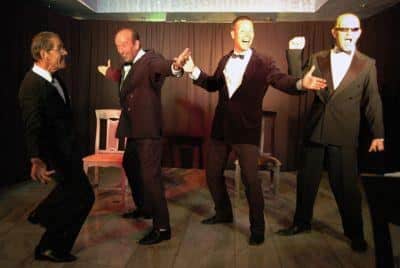 Experimental theatre group Aperitivo performed their latest production Bouncers at the Raj Restaurant in the Hotel Garbe in Armação de Pêra on May 21 and later at Quinta da Fonte do Bispo on May 23.

Aperitivo is an experimental group often seen at São Brás Museum but breaking into the commercial world of theatre-dinners was a new experience.

Jane Page, the play’s director, staged the complex scenes and adapted the script to include local references to Albufeira and Monte Gordo. The setting used was a well known Algarve nightclub, where the tough-guy bouncers were in charge of security.

The cast of four took on various other roles, either as dancers at the disco or as young women enjoying a night out.