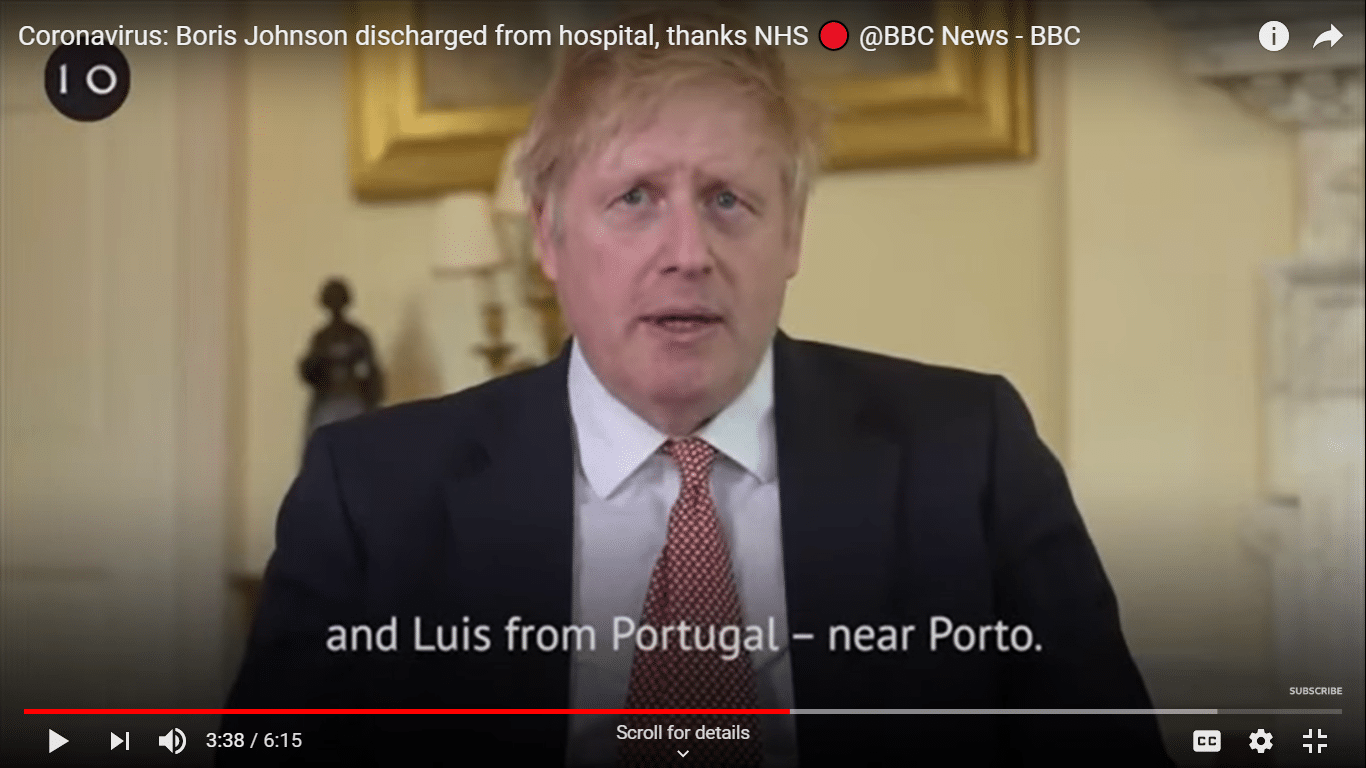 Only today released from hospital, British prime minister Boris Johnson has this afternoon given special thanks to a Portuguese nurse called Luís who he said stood by his bedside for 48-hours “when things could have gone either way” in his battle to survive Covid-19.

Luís from ‘near Porto’- alongside a female colleague by the name of Jenny, from New Zealand – ‘cared and made interventions’ that the seriously ill Mr Johnson needed at what was clearly an absolutely critical time.

In a televised speech to the nation in which he said the NHS had saved his life “no question”, Mr Johnson rattled off a list of names of “the many nurses men and women whose care has been so astonishing” and then he came to Jenny and Luís whom he said he wanted to mention “in particular”.

“The reason my body in the end did start to get enough oxygen was because for every second of the night they were watching and they were thinking and they were caring and making the interventions I needed”, said Mr Johnson.

It was a heartwarming ‘Easter Day’ message in which the British PM not only thanked the ‘brilliant’ doctors and staff at St Thomas’s Hospital in London, but the British people as well for creating what he called a ‘human shield’ that has protected the NHS from becoming overwhelmed by an influx of critical cases like his own.

Mr Johnson stressed that the care he received means he knows first hand that “across the country, 24 hours a day for every second of every hour there are hundreds of thousands of NHS staff who are acting with the same thought and precision as Jenny and Luís”.

The message ended with the uplifting assertion that the British national health service is ‘unconquerable’ and ‘powered by love’.

Mr Johnson is said to be under doctors orders to take his recovery slowly. Judging by this message, recorded almost the minute he returned to Downing Street – after seven nights in hospital, three of them in intensive care – it may be a tough call for those trying to ensure that he does.

Update: Within hours of Boris Johnson’s mention of ‘Luís from Portugal’, President Marcelo had managed to locate the health professional in question and extend his own thanks. The site of the presidency informs that Marcelo “telephoned this afternoon to London and personally transmitted his thanks to nurse Luís Pitarma”. The president took the occasion to “also thank the efforts of all Portuguese health professionals that in Portugal and all over the world are giving decisive help in the combat of the pandemic”.