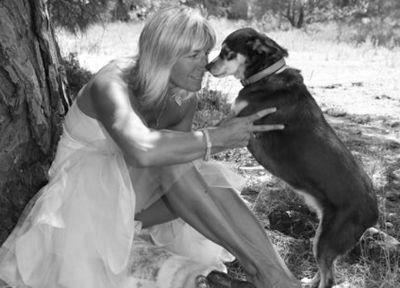 Quintinha dos Animais animal shelter in Goldra, which is facing financial problems at present, has received a boost from two fundraising projects.

The first is a charity calendar, which is being released for the third consecutive year.

The calendar, Rescue Dogs and the People Who Love Them, will feature images of various people living in the Algarve with a dog that they have rescued.

The calendar is organised by Suzanne Pebble and Ingrid Moody, with Sally Mulholland taking the photographs.

It is due to be on sale in October, at 10 euros, at the Griffin Bookshop, Shoes and Cards 4 U and Philipe Stable, all in Almancil, and Dunas and Camelia’s at Quinta Shopping.

There will be a limited number of copies of the calendar this year so if you wish to reserve a calendar, call Ingrid on 918 873 896 and email at ingridmoody@gmail.com or Suzanne on 968 451 949 and email at suzannepeebles@gmail.com.

Meanwhile, a golf competition is being organised for the Quinta da Ria Charity Day on September 17 to raise funds for Quintinha dos Animais.

The Ria golf course has been donated free of charge by Quinta da Ria.

The competition is a pairs better ball stableford, with prizes for the top three players.

Entry fee for the event is 50 euros, which includes the green fee plus a BBQ and beer or wine after the competition. The event begins at 8.30am.

For more information and booking details, please call Quinta da Ria on 281 950 585 or Doug Moody, organiser of the event, on 916 198 785. All money raised helps the shelter continue its work in re-habilitating, re-homing and caring for the dogs and cats that have been abandoned or abused in the Algarve.