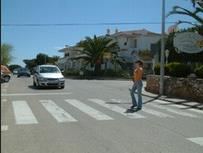 A MOTORCYCLIST, travelling at high speed through the village of Carvoeiro last Saturday night, failed to stop at a zebra crossing on Estrada do Farol, causing the death of one pedestrian and serious injuries to two others.

Carlos Geou, a restaurant owner who spoke to Correio da Manhã newspaper at the scene, said the bike was travelling at great speed: “First, he collided with a foreign woman who was on the pavement, afterwards he hit two Portuguese women who had begun crossing the road. One was thrown against a parked car and died, the other was dragged along by the bike and suffered serious facial injuries. The motorbike was in two pieces and the driver lay on the ground.” Werner Schmidt, a German tourist, told a similar story: “I saw a motorbike travelling at high speed, first it hit one woman and, a second later, two more people were run down.”

Apparently, many members of the public witnessed the accident and, according to Carlos Geou, “some people fainted and others felt unwell”.

Of the two Portuguese women hit on the zebra crossing, one, aged 42, died at the scene, the other is being treated at Hospital de São José in Lisbon, where

on zebra crossing continued she lives. The third victim, a 57-year-old German woman, has been receiving treatment at the Barlavento Hospital in Portimão.

The motorcyclist, aged 23 and a resident of Carvoeiro, was immediately taken to hospital but has already been allowed to return home, suffering only minor injuries. According to his family, he doesn’t remember anything about the accident. The GNR are investigating the cause of the accident.

Estrada do Farol, which links the centre of Carvoeiro to the Vale de Centeanes area, is home to many tourist hotels and has been the location for various serious accidents.

“In five years, I have already witnessed three people die at the same spot where this latest tragedy took place (the zebra crossing before the turn to Algar Seco). It is a disgrace that nobody does anything. It is necessary to place speed bumps or other deterrents, in order to force drivers to reduce their speed,” said the restaurant owner.

Road safety is clearly an issue that requires attention in the area. There are many restaurants and bars located along Estrada do Farol and a lot of traffic, especially at night. Cars park on the pavement and force pedestrians to walk on the road.

ONE MAN died and seven people were injured, six of them seriously, following a crash that took place on the EN125 at the entrance to Faro, close to the turn off for Montenegro and the Ibis Hotel, last Friday afternoon. Witnesses say a silver Audi A3, which may have been travelling as fast as 200kph in the Loulé/Faro direction, caused the accident when overtaking a car on the inside. On returning to the left lane, it collided with another vehicle and lost control, careering onto the other side of the road and colliding with several cars travelling in the opposite direction.

A small white commercial van overturned, resulting in the death of its 55-year-old male driver. Six other people were injured – the occupants of three vehicles hit head on, and a motorcyclist. One of those injured was a 10-month-old baby who had been travelling in the back of a car. Miraculously, due to the fact that the infant was securely restrained in an approved child seat, its injuries were minor, despite the force of the impact. The driver of the Audi reportedly only suffered minor cuts and bruises as a result of the crash.

There was an extremely fast response from Faro Bombeiros and the INEM ambulance service, which sent five vehicles and two ambulances to the scene. However, traffic came to a standstill for many hours while the emergency services assisted the victims and cleared the wrecked cars from the road.

Faro Hospital has confirmed that all those injured are now out of danger. Faro police are investigating the cause of the accident.

A 48-YEAR-OLD Romanian man was killed in Almancil last week, the victim of a collision between a bicycle and a car. Again, the accident happened on the EN125, but this time near Pereiras, close to where the man lived.

The driver of the car, a 41-year-old man from Quarteira, was required to undergo tests to verify the alcohol and drug levels in his blood. He did not suffer any injuries.

Loulé Bombeiros and the INEM ambulance service were on the scene and the body was transferred to Faro Hospital for an autopsy. Albufeira traffic police are dealing with the incident.