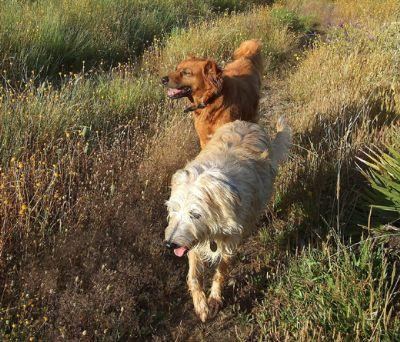 June 2009 will be filed under ‘Black Month’, the memory secluding it in a dark corner of my mind to be brought out as a bench mark should I complain about some triviality in the future.

First Millie the Shag Pile bitch was in the wars having sustained a cut hind paw in our absence and this had become infected. Daily walks were, at first, out of the question as she hobbled outside to do that which is a daily necessity but performed on three legs. Regular visits to a local vet were a steady drain on the exchequer, not to mention the cost of some specially designed dog boots which fitted over the bandage and proved a real asset. Wearing one of these allowed her to come walking again with her best friend and renowned hunter, Brownie the mongrel from next door. Yesterday the bandage was removed, Millie was given a clean bill of health and is no longer lame on that foot but immediately started limping with her front paw.

Much worse was to come when the Boss was felled by a sudden acute pain between his ribs which rendered him unconscious and sent me dialling for an ambulance. Mercifully this arrived within 20 minutes and the paramedics carried out an ECG (electrocardiogram), found his heart to be in working order and took him to Barlavento A & E where he was checked again. A good friend drove me there and waited with me for most of the morning: the Boss was discharged that evening.

He was taken severely ill early next morning and again I phoned for an ambulance. Offered the choice of Lagos or Barlavento, he opted for the latter through chattering teeth and violent fits of shivering. Driving myself this time, I spent the morning in the waiting room and was finally allowed to have five minutes alongside his stretcher. Admitted to the Urgência ward that afternoon, he remained there for two days with a drip in one arm, wired to a heart monitor, a tube up his nose and with another doing something in the other arm. From there to a medical ward with constant monitoring, CT scans, drips, X-Ray and daily blood sampling.

The reason for writing a blow-by-blow account of what passed is to record not only the efficiency and speed with which our emergency was met, but also to praise the kindness and high standard of care within the hospital. At no stage was I excluded. Visiting hours are liberal and, once run to ground, doctors on the case have answered all my questions and also told me what they had found. Back home, Millie and I felt like lost sheep, and with small things going wrong about the house it has been a steep learning curve.

As I write, we are back together again under the same roof and just in time for a real hike in temperature, the house holding a steady 31-32 degrees centigrade until the early hours and rarely below 28. Being surrounded by rocky outcrop and cornflake crisp ground cover, there is no way to dissipate heat stored within bricks and mortar. The dog having lived most of her life in West Wales is finding a hot dry climate very trying after years in one of the wetter parts of Britain. Our country walks are confined to open tracks and bare ground because this year’s eruption of ticks is on the offensive, and sometimes we come home carrying unwanted fellow travellers. One such became firmly embedded in my leg and in the Boss’s absence it was up to me to pull it out: successfully, I am happy to relate and with all mouth parts still attached.

Meanwhile, animals indigenous to our part of the Algarve are getting on with their daily life, mostly unseen apart from a few clues left in passing. Round holes of assorted size from half an inch upward are appearing in bare patches of earth: perhaps made by various reptiles kick started by the long warm days, some of which are dependent upon the sun’s radiation before they can move about. The other evening I surprised an extremely active dark glossy dark green snake about two metres long which disappeared into a pile of bricks near the house. Next day a small Horseshoe Whip snake was thrashing about in an empty bowl nearby.

Meanwhile a plague of randy little sparrows continues to scatter carpets of nesting material on every flat surface, bombing the patio with new laid eggs whenever a female is caught short on the way to her nest. Small, blue and delicate, their golden yolk swimming in a clear sea of albumen that in no time sets fast like glue in the hot sun. In the middle distance on an otherwise peaceful weekend, the sound of gun shots across the valley reminded me that the hunting season will soon be upon us. From August until the following February, it is permissible to shoot migratory species while those classed as ‘sedentary’ may be shot all year. According to the Law, four separate licences are needed plus hunting insurance to a minimum of 9,975 euros in order to acquire a Licença de Caça Geral (general hunting licence). To obtain that licence hunters must pass both a theoretical and practical exam. These are the regulations and one can only hope that they are enforced.