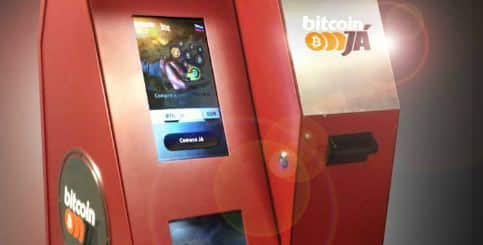 The day after computer supremo Bill Gates wholeheartedly endorsed the worth of crypto-currency Bitcoin, Lisbon is to receive its first Bitcoin ATM.
The two-way machine designed to handle conversion between bitcoin and state-regulated currency will be presented at a ceremony in the lobby of the @Cinema at Saldanha Residence in Lisbon tomorrow (Saturday).
The event will include a screening of the movie “The Rise and Rise of Bitcoin” designed to highlight the beauty of this virtual currency that can be transferred anonymously between users.
Described by Bill Gates a few months ago as “a technological tour-de-force”, the co-founder of Microsoft told Bloomberg on Friday: “Bitcoin is better than currency in that you don’t have to be physically in the same place and of course for large transactions currency can get pretty inconvenient.”
Gates was talking to Bloomberg about “the promise of digital financial services and how the world’s existing financial institutions should leverage them to provide services to the developing world”.
Bitcoin fits the bill, Gates stressed – although there are still reservations that it can be used for terrorism and money-laundering.
In July this year, a new blog associated with the Islamic State in Iraq and Syria (ISIS) claimed that bitcoin could “enable jihad on a large scale” by sending “millions of dollars” to fighters in an untraceable way.
But the dark side of the crypto-currency will be kept firmly under wraps tomorrow in Lisbon when Portuguese start-up Bitcoin Já unveils its “baby” – made exclusively in Portugal.
Founder Joaquim Lambiza explains that the ATM has been designed to be scalable, and easily upgradable – an important factor considering the rapid growth of “altcoin” technology.
For now, the Lisbon ATM will also offer PayPal Cash top-up facilities and “other services”, to be revealed at the opening ceremony at 5pm.
From Saturday onwards, the @Cinema box office will accept digital payments from the ATM.
According to diáriodigital website, the current worth of a bitcoin is €295.