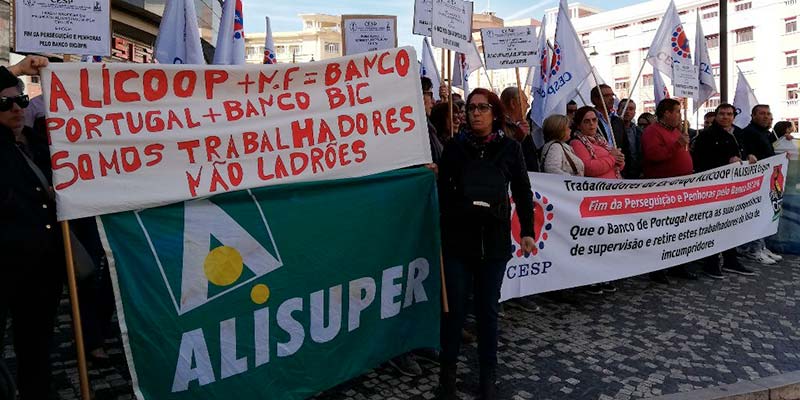 BIC bank has announced that it has suspended all debt recovery actions against the former employees of Alicoop, the group that owned Alisuper supermarkets, for 90 days until it can “clarify the situation”.

The decision came following a meeting between the bank and three of the employees’ representatives – Paulo Martins, Luís Alves and Sérgio Catarino. The meeting was followed by a demonstration that led 100 former workers of the Alicoop group to protest outside the headquarters of EuroBIC in Lisbon on February 26.

The case relates to a series of loans to the tune of €1.7 million taken on by the ex-workers to help save Alicoop from bankruptcy in 2008. When Grupo Nogueira took over the group in 2012, it was agreed that the debts would be taken over by the group.

However, BIC has been hounding the workers ever since. Many have faced ‘penhoras’ (seizures) and have been taken to court to pay the debts.

The bank is now promising that if a court proves that the debts are no longer the responsibility of the former employees, then it will pay back those who have already paid.
michael.bruxo@algarveresident.com