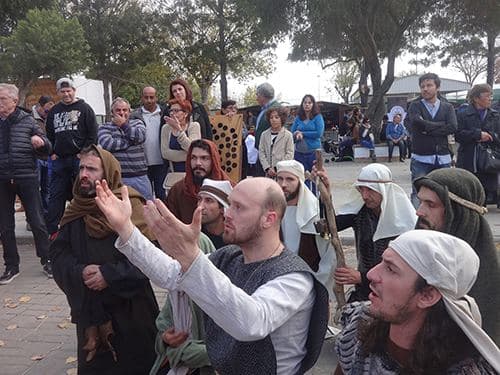 A Celebration Mass was held on Wednesday at the Matriz Church in Olhão to mark the actual day ninety-nine years ago when Sporting Clube de Olhanense was founded.

This church was one of the first stone buildings constructed in Olhão and built with contributions from the anglers at the start of the 18th centenary.

In the bell tower is an inscription – “The seamen of this community have made possible this new temple, at a time when there were only a few huts where they lived.”

Following the church service, an activities session took place at the Olhanense Stadium in conjunction with the Cerebal Palsy Association of Portugal.

Tonight (Friday) more than 200 guests will help to celebrate the club’s 99th anniversary when attending the annual dinner at the five star Real Marina Hotel.

On Sunday, UEFA Europa League semi-finalists Benfica step out at the José Arcanjo Stadium, Olhão for a crucial game for the home side.

Olhanense, without a win in nine games, need at least a point to guarantee Premier League survival for next season.

It is hoped that central defender Jardel, signed by Benfica from Olhanense in January, will feature for the Eagles. Kick-off is 6.15pm and tickets, priced €12.50 to €30 for the best seats, are available from the club Box Office. Chris Wright