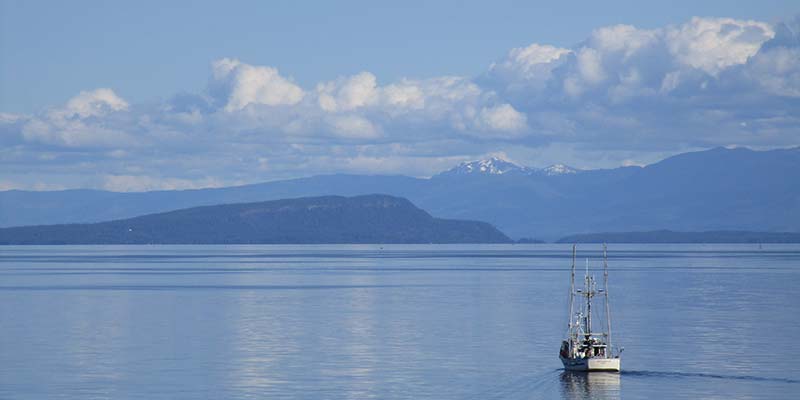 Tucked into the southwest corner of British Columbia is a stretch of paradise known as the Sunshine Coast. It is reached from West Vancouver by a 40-minute ferry ride from Horseshoe Bay across scenic Howe Sound.

This coastline has many deep inlets and is sheltered from the open Pacific Ocean by offshore islands. Moist, mild winters and warm dry summers characterise the local climate. Temperate rain forests line the rocky shores and soaring snow-covered peaks rise up behind.

On a day of sunshine, showers and angry skies, we alighted from the ferry at Langdale on Howe Sound and made the short road journey on Highway 101 to lovely Gibsons Landing. This quaint little town, with stunning views across Howe Sound, has a busy working harbour, pier and a plethora of boats and yachts – including permanently moored houseboats covered in pots of colourful flowers.

Molly’s Reach Restaurant is the town’s most famous building, as it was once the location for one of Canada’s most popular ever TV series – The Beachcombers – which ran for 19 years, ending in 1990. Gibsons has also earned international recognition as one of the world’s ‘Most Liveable Small Towns’.

The main road now meanders along the coast northwards past sandy beaches at Roberts Creek and Davis Bay to reach Sechelt. This unusual but strangely appealing village is perched on a narrow isthmus with the ocean on both sides, and has a popular waterfront walkway with picnic tables and informative heritage plaques. It is named after the Shíshálh, the original First Nations people of the region – the word Sechelt meaning, “land between two waters”. The residents include many artists, craft people, performers and writers. This creative community hosts a bewildering array of festivals in the summer season.

Highway 101 continues through dense forest to Halfmoon Bay and the romantically named Secret Cove, a charming spot, where we had booked our accommodation for the night in a small guesthouse – snug and comfortable.

This rural idyll is nicknamed the ‘Venice of the North’ because of its complex network of waterways. The road system is even more confusing and an absolute nightmare for those trying to navigate with a GPS!

Everything is focused on glorious Pender Harbour, whose many winding channels lead to the beautiful little townships of Madeira Park, Garden Bay and Irvines Landing. Noticing the name Madeira Park, we searched for a Portuguese connection and we were soon rewarded, down by the harbour, by the discovery of the statue of ‘Portuguese Joe’ – namely Joseph Gonçalves. This flamboyant character immigrated to Vancouver in the 1870s and together with his eldest daughter, Matilda, bought large tracts of land around Pender Harbour. The settlement rapidly became known as the ‘Land of Portuguese Joe’, after he built a hotel, general store, post office and even a deep-sea dock. He named the community Madeira Park in honour of the island of his childhood. This pretty little village was renowned for its lively social life and Matilda was said to preside over the whole place like a benevolent aunt. Portuguese Joe died in 1939 at the age of 82 – but his memory lives on.

Earls Cove ferry terminal on Jervis Inlet lies close to Pender Harbour and is the gateway to the upper stretch of the Sunshine Coast on the Malaspina Peninsula.

We loved the 50-minute ferry crossing. The scenery was superb with cliffs rising sheer from the water’s edge and barely any human habitation in sight.

The coast here is profoundly indented, cutting deep into the mountains, the highest of which is Mt. Alfred at 2,420m. Both Jervis Inlet and Desolation Sound further north have such classic fjord-like proportions that they attract a great deal of marine tourist traffic in high summer. The peninsula itself was named after Alessandro Malaspina, an intrepid Italian explorer who helped chart the British Columbian and Alaskan coasts in the 1790s, whilst in the service of the Spanish Royal Navy.

As we drove along the seashore, there were tremendous views west across the Malaspina Strait towards the offshore islands. After passing through the town of Powell River, we reached the end of the road (literally) at Lund, a charming fishing village and, in our opinion, the jewel of the whole Sunshine Coast.

The Swedish Thulin brothers named the village after Lund in Sweden, when they settled locally in 1859, allegedly because it was easy for non-Scandinavians to pronounce!

In the centre of the settlement is Lund’s Mile 0 marker – showing the most northern terminus of the Pacific Coastal Highway that runs 15,202kms to the southern tip of Chile. From Lund Harbour, boats can be chartered to tour Desolation Sound and nearby wildlife sanctuaries.

The historic Lund Hotel is at the very heart of the village, with a pub, dining room and quality gift shop.

In 2016, the local Tla’Amin First Nation people proudly took full ownership of this establishment. We admired the imaginative soap stone carvings in the gift shop and were entranced by the humming birds darting amongst the bushes outside. Finally, we munched hungrily on delicious Cinnamon Buns (surely a Swedish recipe) at the celebrated Nancy’s Bakery, which overlooks Lund’s eye-catching harbour.

Sadly, it was soon time to tear ourselves away from this perfect place, so we retraced our steps to Powell River, whose town centre is dominated by what was once the world’s largest paper mill. Bristling with pride, the lady at the Information Centre told us that this mill provided the superlative quality of paper used for the publication of, not the latest edition of the ‘Works of Shakespeare’, but for the steamy novel ‘Fifty Shades of Grey’!

Powell River Historic Townsite is the major tourist attraction here, and is a wonderful example of early Canadian town planning, dating back to 1910. It is remarkably intact with over 400 well-kept wooden houses, shops, churches and a theatre, all contained within its original borders.

Late in the afternoon, we made our way to the town’s marina and boarded the car ferry that sailed west across the Malaspina Strait. As the ship slipped gently from the quayside, we looked back with regret at having to leave the lovely Sunshine Coast, but forward with anticipation to exploring Vancouver Island, whose snow-capped summits lay directly ahead.

In Part 2, we drive through Vancouver Island’s central forest and mountains, visit the unspoiled and untamed west coast, and enjoy the highlights of Victoria, its outstanding capital city.

Nigel Wright and his wife Sue moved to Portugal 13 years ago and live near Guia. They lived and worked in the Far East and Middle East during the 1980s and 90s, and although now retired, still continue to travel and seek out new cultural experiences. His other interests include tennis, gardening and photography.