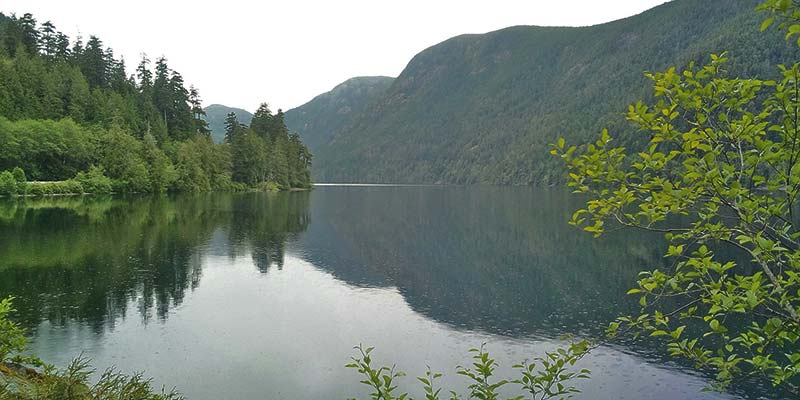 Vancouver Island is the largest island on North America’s west coast, has Canada’s mildest climate, a rugged chain of mountains rising to 2,200m and bounteous wildlife including bears, wolves, elk, cougars, sea lions and whales. The city of Courtney is the gateway to the middle of the island, and we arrived on a sunny evening by car ferry from Powell River on British Columbia’s mainland.

After a comfortable night’s sleep and a hearty breakfast of pancakes and maple syrup, we strolled around Courtney’s shopping malls and couldn’t help noticing a surfeit of health centres, physiotherapists and chiropractors. Their clientele probably included some over-zealous fitness freaks who were members of the nearby ‘Holy Cow Yoga Emporium’ and the ‘Look Good Naked Gym’!

As forecast, the heavy rain began as we drove westwards through the mountains towards the untamed, unspoiled west coast and the Pacific Rim National Park Reserve. On route we stopped deep in the forest to admire the picturesque Cameron Lake. A large prehistoric monster allegedly lurks in its murky depths, but on this rather grey day, it clearly didn’t feel the urge to surface for our benefit.

The landscape became more spectacular as we passed through the mountains before descending alongside the tumbling white waters of the Kennedy River to the wooded shores of beautiful Kennedy Lake, the largest on the island. Finally we reached the west coast, where our planned lunch destination was the busy tourist town of Tofino, at the end of the Pacific Rim Highway. This rather ugly little metropolis with its drab waterfront was very disappointing.

We struggled to park, were unable to find a decent restaurant not already full of dripping wet trippers, and decided to move on. Retracing our route, we ventured on to famous Long Beach, a wild paradise for courageous surfers, but not a place for mere mortals to linger on such an awful day.

Our accommodation for the night was at Ucluelet, an attractive, neat, tidy and well planned seaside village on the tip of a peninsula further to the south. Three graceful Black-Tailed Deer welcomed us to this charming township – strolling nonchalantly down the main street as we arrived.

The following morning, we enthusiastically tucked into a sumptuous full-Canadian breakfast at ‘The Blue Room Bistro’ before visiting the Amphitrite Lighthouse.

The highlight of our return journey eastwards was Cathedral Grove, a rare and endangered remnant of the island’s ancient Douglas Fir ecosystem. Some of these magnificent conifers are 800 years old. Winding walkways with helpful interpretation boards lead the visitor through a Tolkienesque wonderland full of botanical treats.

One of the island’s most unusual waterfalls is nearby at Englishman River Falls Provincial Park. There is an impressive view of the falls from a bridge that crosses the river just where it plummets down into a narrow rock canyon towards quieter waters below.

Two hours later, in improving weather, we entered the historic seaport of Victoria, scenically situated on the island’s southeast shores.

Known as ‘the garden city’, Victoria has around 350,000 residents and is the administrative capital of British Columbia. Its two most iconic buildings, the Legislative Assembly and the ‘chateau-style’ Empress Hotel, both overlook the beautiful Inner Harbour – a place that buzzes with action all day long with ferries, yachts, water taxis and seaplanes coming and going.

There is no better way to explore this terrific city than to take the Hop On/Hop Off bus tour. We particularly enjoyed Fisherman’s Wharf, watching deer at Beacon Hill Park, Oak Bay Village with its posh properties, Cook St. Village’s colourful gardens, Chinatown and the busy harbour wharf.

We later explored some of the quaint shops and heritage buildings in the Old Town before visiting the Royal British Columbia Museum. Its contents focus on the Province’s natural and human history and we soon became absorbed in the contents of the First People’s Gallery. This has an imaginatively displayed collection of First Nations artefacts, including a model village, long house, totem poles, traditional attire and ceremonial masks.

The section concerning native languages was fascinating. Indigenous people believe that “everything belongs to those not yet born” and language is one of those things.

In British Columbia, there are over 30 indigenous mother tongues, and almost all are in danger of disappearing. Happily, significant efforts are now under way to rekindle interest in language, as it is a vital element in nurturing native pride, identity and culture.

After leaving Victoria, our next stop was the world-famous Butchart Garden. Over 100 years ago, Jennie Butchart began a lifelong project to create a magnificent large garden. A lady of great vision, she transformed a barren limestone quarry into the central attraction of what has become a magical horticultural oasis. It covers 22 hectares and boasts over 900 bedding plant varieties. The Sunken Garden is undoubtedly the visual highlight but we also lingered awhile in the Japanese and Italian Gardens and savoured the heady scent in the amazing Rose Garden – with hundreds of varieties from all over the planet.

Our last night on the island was spent at the nearby seaside town of Sidney, a haven for the retired, although its close proximity to busy Victoria Airport must be irritating for the residents. Our departure for the mainland was from Swartz Bay Ferry Terminal the following morning. This idyllic sea passage is best made in two hops, calling at Salt Spring Island on route.

Beautiful Salt Spring is the largest island in the Gulf of Georgia, and near the Canada/USA border. As it is so close to the USA, it gained notoriety as a refuge for draft dodgers at the time of the Vietnam War. Nowadays, it has an active arts and crafts population and is a hideaway for the rich and famous – Barbara Streisand, Phil Collins and Kevin Costner all have properties here.

The proud local residents even have their own currency, Salt Spring Dollars, which trade on par with the Canadian dollar. We arrived just in time to attend the popular Saturday craft market in the town of Ganges. There was an amazing range of goodies on sale – from vegan cheese (made from plants) to pointy witches hats (like the ‘Sorting Hat’ in Harry Potter).

It was a baking hot sunny afternoon as we made our final sea crossing from Salt Spring to Tsawwassen, just south of Vancouver. However, there was a deliciously cool sea breeze on deck, and as we meandered past more attractive Gulf Islands on route, there were far ranging views of the mountains of Canada and the USA – notably the beautifully sculpted volcanic cone of Mt. Baker, in Washington State. This lovely short voyage was a perfect ending to our British Columbian coastal adventures.

By Nigel Wright
|| features@algarveresident.com
Nigel Wright and his wife Sue moved to Portugal 13 years ago and live near Guia. They lived and worked in the Far East and Middle East during the 1980s and 90s, and although now retired, still continue to travel and seek out new cultural experiences. His other interests include tennis, gardening and photography. 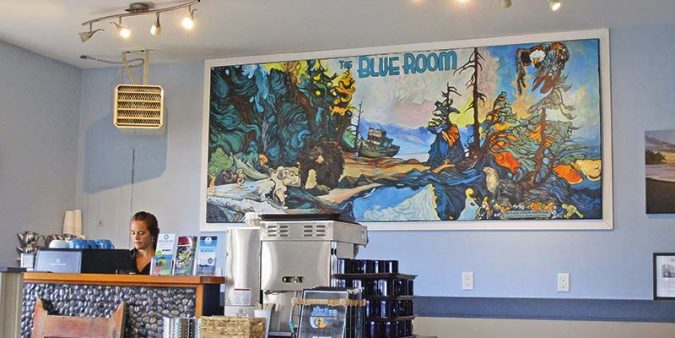