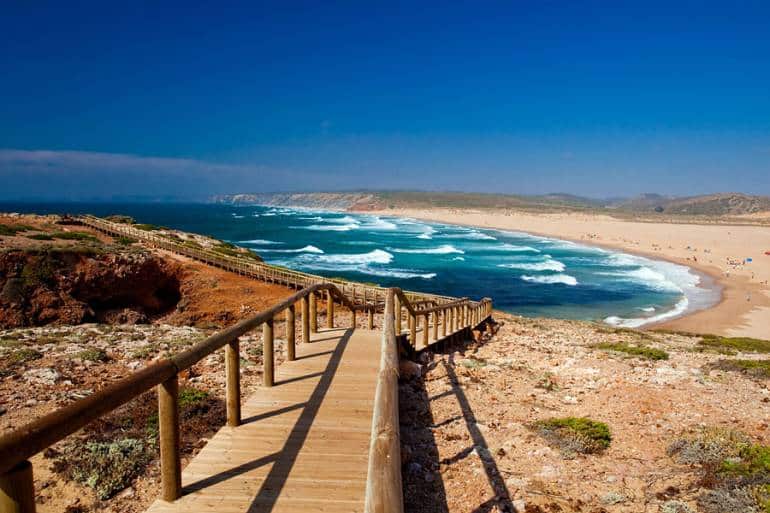 PM António Costa has finally rolled out the definitive list of beach ‘do’s and don’ts’ for this extraordinary virus-blighted summer.

Says Expresso, “the rules are not as strict as people had been fearing, which will please many council leaders”.

The hideous spectre of people being herded quite literally onto ‘supervised beaches’ – and not given the freedom to choose ‘away-from-it-all’ locations, devoid of beach bars, life guards and sun-loungers – has not materialised.

According to Correio da Manhã, the Navy will watch those beaches “to avoid situations in which public health could be put at risk”. But no one will be telling people to leave and go to a ‘supervised beach’ where virtual ‘traffic lights’ will indeed be controlling numbers.

Explain reports, these ‘traffic lights’ will be in the form of flags flown on the beaches (green signalling low occupation, in other words: yes, ‘come on over’; yellow signalling elevated occupation, and red meaning: ‘find another beach, this one’s full’).

The new mobile phone app “info praias” will also carry this information for supervised beaches, so allowing beachgoers to plan ahead.

But ideas for ‘drones’ overflying the seashore and police and/ or military marching up and down, ordering people off or apart, have all been shelved.

Said Costa, this summer will be all about responsibility.

“We can’t have police alongside people on the beaches. We have to police ourselves. I trust the Portuguese”, he told Correio da Manhã. “If they were able to sacrifice their liberty for two months, they are not going to throw it all away by not showing civic responsibility on the beaches…”

Thus the definitive list – for supervised beaches – will come into effect from June 6:

Nothing is said about the picnics many families take to the beach. It had been suggested food would not be allowed on beaches to reduce litter, but this too looks like it has been ‘shelved’, very possibly because so many people have to take snacks for young children, particularly babies.

This summer will be without the popular ‘banana boats’, pedalos and kayaks. In compensation concessions are being allowed to extend their areas of shades, though these are unlikely to bring in anything like the money from equipment rentals and ‘fun rides’.

Paramount is the word ‘responsibility’: the threat being that if people do not behave responsibly, their ‘favourite beach’ could risk being closed to access altogether.

Unsupervised beaches – particularly those along the west coast – are invariably ‘vast’ thus controls will be less evident. Discussing them with CM, the PM agreed there could be “an increase in the demand” for unsupervised beaches this summer, simply because they will afford families a great deal more ‘breathing space’ from restrictions. The downside, however, is the lack of lifeguard support if it’s needed.