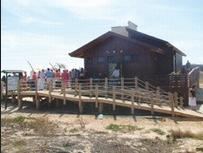 REMEMBER 2001 when we were trying to figure out why our favourite beach bars were forced to undergo major renovation works?

Five years on, it appears that the investment of bar owners, made in order to protect and conserve the coastline, has still not been recognised by the Regional Development and Co-ordinating Commission of the Algarve (CCDR-Alg), the organisation overseeing the project.

In March of 1999, the Council of Ministers announced Os Planos de Ordenamento da Orla Costeira (POOC). In short, this was a complex set of special regulations about the management of the Orla Costeira, the coastline of Portugal stretching from Caminha to Vila Real do Santo António. The three main aims of the project were to:

• Protect the biophysical integrity of the space.

• Conserve the environmental values and characteristics of the coast including dunes, cliffs and estuaries.

• Highlight the resources of the coastal fringe.

The in-depth list of rules and regulations ensured that beaches would protect their natural resources, as well as making them modern and accessible for tourists. The most noticeable change was to the beach bars.

The administration divided the coastline into nine parts, with the Algarve being split into three sectors: Sines to Burgau, Burgau to Vilamoura and Vilamoura to Vila Real de Santo António, who all received various guidelines on how the beaches were to be maintained.

The CCDR-Alg, as the body charged with overseeing the protection and development of the Algarve, was responsible for the execution of the plan.

The rules declared that beach bars had to be built on a raised platform, above the sand or, alternatively, set back from the beach. It was also stated that they had to be made out of materials that could easily be dismantled and therefore avoid becoming an environmental threat at a later date.

As a result many of the bars were knocked down and rebuilt using timber, much to the dismay of beach goers who preferred the traditional Portuguese buildings rather than the new modern sculptures that were appearing.

One of the main focuses of POOC was accessibility, especially for the disabled. All the beaches had to provide adequate parking with space for disabled and emergency services, as well as ramps on and off the beach.

In addition, bars and restaurants had to have disabled toilets, disabled access and a first aid post, the size and amount of these facilities being dependant on the capacity of the building. The rules were so stringent that there were even regulations on how high tables should be.

Hygiene was another important factor and the plans demanded that all buildings had to  provide an indoor shower area. All the bar owners were also told they had to provide a lifeguard for the part of the beach they were responsible for, as well as positioning bathing areas and volleyball courts so that they did not cause any danger to any nearby dunes.

As a result of the investment by restaurant proprietors, the local authorities made numerous promises in return for their co-operation. Mainly that all the bars would have their licence to operate renewed once the rules were complied with. As the coastline belongs to Portugal and is not privately owned, bar owners must obtain a license to operate their premises on a beach.

Shockingly, over five years on, the majority of bars have still not received a license.

Numerous letters and calls have been made to the CCDR-Alg without response and owners are now at a loss to understand why this issue hasn’t been dealt with and are uncertain if they will receive licenses at all.

One proprietor from Meia Praia in Lagos, stated that: “In theory, we are all operating illegally, it doesn’t make the businesses feel very secure.” Many are angry that after the amount of time and money committed to the project, their efforts have not been acknowledged by the environmental organisation.

However, not all bar owners feel this way. One proprietor, who wishes to remain anonymous, spoke of the implicit arrangement of the whole situation. “Everyone knows that many of the bars and restaurants are operating without licenses,” he said.

“However, we are not going to be prosecuted as it’s not our fault. We have complied with the rules that were set out and now it’s just extremely slow bureaucracy that is holding up the situation,” he added.

This is not the only unfulfilled promise from the authorities. The bars on Meia Praia were promised a new sewerage system to serve the numerous establishments along the vast stretch of beach.

During renovation works, the majority of bars removed septic tanks that served their business, expecting the new sewerage system to be in place when they were ready to open. No work ever appeared and there has been no sign of any work beginning, forcing the bars to reinstall their septic tanks.

There is a general feeling that the different situations of bars and the layout of more remote beaches has not been fully taken into account by the authorities.

Some bars are situated in areas hugely inconvenient for the disabled and bars have had to spend huge amounts of money making their bars accessible for people who are very unlikely to use them. These bars agreed to the new accessibility rules with the belief that roads would be built to make the renovation works worthwhile, however, again this has not been the case.

Bahia Bar in Lagos has had to build its own wooden walkway, raised above the sand, to ensure people can access the establishment.

Although the move was unpopular at its inception, owners and residents alike have slowly come round to the new style of beach bars, which although may not retain their traditional Portuguese essence, are economically friendly and will contribute towards sustaining the Algarve beaches far into the future.

The Ministry for the Environment say the plans have taken into account the defence of various interests and points of view with the aim of harmonizing private and local services. The move has been seen as a success environmentally, and furthermore, has rehabilitated many degraded areas of the coastline.

In spite of these positive effects, the CCDR-Alg has ignored the letters and calls from despairing bar owners and is currently unable to comment on the situation regarding the licensing of the beach bars in the Algarve.

Interestingly there is one beach bar in the Lagos area that has chosen not to comply with the new regulations and is facing prosecution from the authorities.

The Resident is investigating the situation further and would like to hear feedback from readers. If anyone has any relevant information regarding the situation, please contact ruth@portugalresident.com