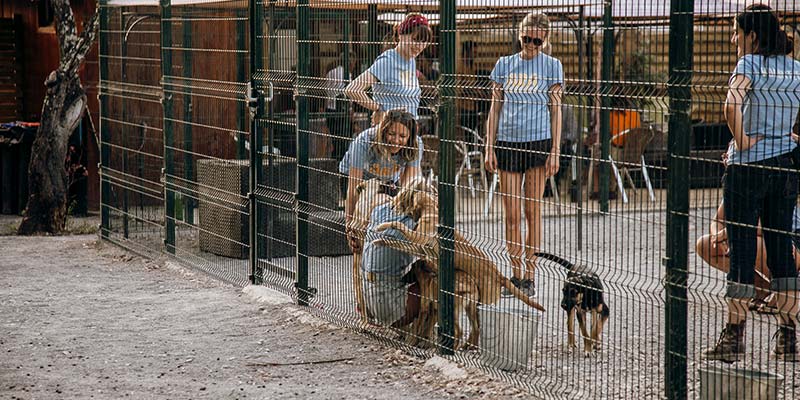 Loulé Câmara (town council) has a problem that simply refuses to go away: a number of privately-run animal shelters in its catchment area are barking mad over the way they are being treated. They cite incidences where the council has repeatedly ignored generous offers to upgrade/ rebuild its own run-down municipal kennels; repeatedly ignored proposals on how to sterilise hundreds of animals that end up on the streets – and repeatedly stuck to what appears to be a ‘vendetta’ against ideas on how to improve animal welfare generally in a way that could become a blueprint for the rest of the country.

Says Sid Richardson, founder of ARA (standing for Animal Rescue Algarve) – the largest shelter in this fight – “I honestly believe the head of the department for urbanism has something against us. Why else would she order demolition of a shelter that could so easily be approved by the town hall if only there was the political will?”

Heloísa Madeira, the ‘vereadora’ (councillor in charge of) urbanism, has told television journalists that her reasons are purely ‘technical’. ARA was constructed on agricultural land without a licence (click here).

But that is the ‘simple answer’. The truth is that Sid Richardson spent years in talks with the council trying to find the ideal site for ARA. His decision to build on private land he owned came out of desperation because of a problem Loulé itself refused to face. In fact the council  simply gave up looking in the end, we’re told.

Loulé’s three municipal kennels are run-down and overcrowded. The animals are not socialised, or walked (as they should be by law). Contrary to the way privately run shelters treat their charges, council animals generally face years in concrete ‘cages’, often dying without ever being rehomed.

Yet last month Benafim Dogs – a shelter which like ARA prides itself on having a formula that transforms its animals’ lives – became another operation for Loulé council to ‘make an example of’ (again, for being ‘in the wrong place’).

Benafim Dogs received a €3600 fine, and were warned that they had to stop taking in abandoned animals full stop.

“None of this makes sense”, say all involved.

Explains Sid, these shelters serve the community in so many ways – “at zero cost to the Câmara and/ or the taxpayer”.

ARA particularly welcomes hundreds of volunteers from all over the world every year. These tend to have families and friends that then come and visit. The spin-off in terms of revenue for tourism and the local economy is substantial.

ARA also employs directly and indirectly 40 local people. It has an educational programme going with nearby schools – and its founder has “on several occasions over recent years” tried to start dialogue on providing the necessary capital to completely rebuild the municipality’s main ‘kennels’: São Francisco Canil.

The plan – very much to mirror the work undertaken at ARA – would involve significant personal and private investment on the understanding that Loulé municipality would adopt ARA’s standards of animal welfare and cover expenses for sterilisations and veterinary care.

The council has turned an equally deaf ear to the entreaties of Ginie de Weerd, president of SOS Algarve Animals, who wants to explain her ideas of how best to sterilise the hundreds of animals that end up on Loulé’s streets every year.

In Ginie’s case, her latest attempt to get answers came in the form of an Open Letter to Mayor Vítor Aleixo which appeared on our site last month (click here). She says she is going to write ‘an article’ next. She is not giving up.

Animal rights campaigners as a breed are not known for ‘giving up’. But they are not usually as persistent as ARA’s founder and back-up team, nor are they as sufficiently experienced in the ways of the world to try and work out what’s really going on.

The tactics now are to play the Câmara at the game it knows best: politics, and try and enlist the support of members of the opposition who should be challenging the almost autistic manner the Câmara views animal welfare at the next regional assembly.

The pandemic has made it ‘impossible’ for everyday citizens to get their points over at regional assemblies: “You have to lodge the subject you want to talk about before they decide whether you will be allowed in”, ARA’s team told us. “In our case that would almost certainly mean we wouldn’t get a chance”.

So battlelines are drawn – and the council looks like it will have to deal with these issues, whether it likes it or not.

ARA meantime is taking its vision on how to transform animal welfare nationwide to central government.

It has written to the office of environment minister João Pedro Matos Fernandes who had already been shown the shelter’s heartwarming video (click here) and expressed interest in the project.

A call purportedly requested by Heloísa Madeira is understood to have warned him off – due to the fact that ARA is facing a demolition order.

It was a similar story with a well-known Portuguese singer who visited the shelter and wanted to get involved. He too apparently got a call telling him ‘best not to…’

The moral of this shaggy dog story? Animal protectors aren’t dropping the bone. They see a world where animals should be treated with respect – and where those looking out for them are given the help they need.

Mahatma Gandhi said: “The greatness of a nation and its moral progress can be judged by the way it treats its animals”.

In Sid’s view, the first ‘change’ that has to come in Portugal is that private shelters get a special dispensation so that they can use private land for the benefit of abandoned animals without having to worry about fines or demolition orders.

You can bet your bottom dollar he’ll be saying this to the environment minister in the hope that anything Loulé Câmara has to say may be rendered academic.