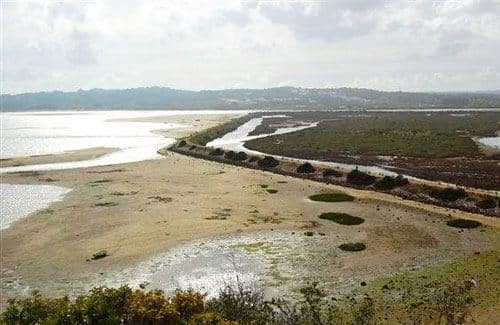 He’s been dubbed an “eco-vandal” and is reportedly €598 million in debt – but that’s not keeping him from fighting back.
Aprígio Santos, well-known within Portugal’s football and business worlds, is reported to be planning two five-star hotels and two tourist complexes in Quinta da Rocha, the 200-hectare country estate he owns near Ria de Alvor estuary which became the centre of an heroic environmental campaign after Santos began destroying natural habitats.
According to Correio da Manhã newspaper this week, the businessman’s latest plans represent an estimated €34.4 million investment.
Where the money is coming from is a mystery, as Santos was earlier this year reported to have almost €600 million in debts.
The bid, which includes the construction of a total of 300 rooms and the apparent creation of 100 jobs, is being put forward through Santos’ firm Butwell Trading.
Portimão mayoress Isilda Gomes has confirmed to CM that the council is “analysing the project” but that it has not yet been approved.
Meantime, opposition councillor João Vasconcelos claims the proposal is “extremely flawed” and filled with “omissions and illegalities”.
A Rocha, the Alvor-based environmental association which waded into battle with Santos and Butwell Trading after successive environmental attacks on the estate, has said it is keeping a close watch on the situation.
By law the hotels must be built at least 500 metres away from the margins of the estuary and not affect natural areas protected by Rede Natura.
“As long as it is all legal, we have nothing to complain about,” A Rocha’s Tiago Branco told CM, stressing, however, that Aprígio Santos has a “long history of environmental destruction”.
It is a history that reached a major turning point earlier this year when the central administrative court of the south upheld a conviction that the habitat at Quinta da Rocha had to be “completely restored to its original condition”.
The court ordered the “permanent suspension of activities in protected areas”, increasing its original 10-year ruling to one that should apply ‘forever’.
It was a landmark case for the environment in Portugal and one which A Rocha is famous for.
Santos’ “environmental terrorism”, as A Rocha dubbed it, was originally spurred by his controversial plans to turn the rolling rural estate into a VIP beach resort.