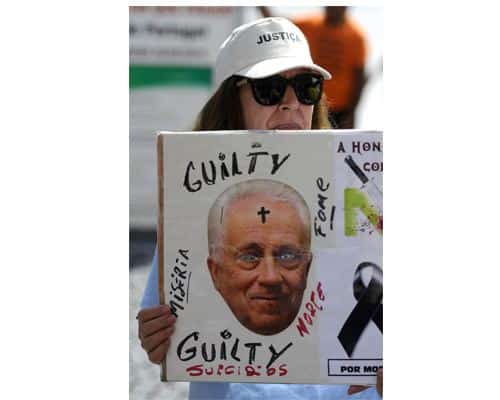 Bank of Portugal governor Carlos Costa is under attack from all sides. Large investors, small investors, ratings agencies, even the government. His decision over the Christmas holidays to “selectively and retroactively confiscate the assets of bondholders who held five senior bonds in Novo Banco” and dump them in the toxic wasteland of BES – the bad bank left to rot since last summer – has caused a rash of litigation, as well as international condemnation. It is not simply that the BdP move has opened a dangerous precedent that could change the face of European banking as we know it; it has shown that banks do not play fair. As national media explains, the decision was originally presented as affecting only institutions. It wasn’t meant to clean out private investors. But when it did, there was not a hint of an apology. The Bank of Portugal didn’t even break its stride.

In fact, all Carlos Costa did was “rephrase” his original statement, saying: “The retransmission to BES covers all bonds emitted under the referred ISIN (debt securities), independent of who owned them on December 29.”

This has left dozens of private investors in the lurch. Portuguese, English, Spanish, they woke up on December 29 to discover they had lost a minimum of €100,000 each. Some have lost five or six times that amount, as a long-term émigré who has worked a lifetime in Brussels told reporters on national television.

The 66-year-old explained she has lost her entire life’s savings. All that remains of years of hard work is her suitcase.

As a source from the association that has now formed to fight the decision said, the worst of this bond-dump is that customers were being assured in the weeks leading up to the decision that their investments were safe.

In fact, some were being encouraged to buy the bonds right up until November, he explained.

“We have a case of a Portuguese woman who was being told the investment was safe less than three weeks before the Bank of Portugal made its decision. She trusted her account manager. She has lost everything.”

So far there are a total of 55 ‘small investors’ who between them lost upwards of €4 million. They claim the BdP decision was “discriminatory and illegal”, and shows a “huge level of incompetence”.

The source for the Associação de Obrigacionistas Sénior Particulares Lesados do Novo Banco explained that the BdP move may well have only been aimed at institutions, but even the most basic inquiries would have thrown up the large number of private people who stood to be affected.

Thus the BdP announcement that the dump was “a purely accounting measure” was an “enormous lie”.

And those who have lost their money have literally no way of ever making it back.

“It is a truly terrible story,” said the source who asked not to be named.

The association has asked for a meeting with the BdP, “as a matter of urgency”, but as we went to press had still heard nothing.

Considering the issue, this in itself is another indication of the bank’s incompetence, said the source.

But small investors’ losses are a drop in the ocean compared to those suffered by “institutions” of which Pimco, one of the world’s largest investment companies, is just one.

Pimco stands to lose €228.6 million in the dump and its managing director Philippe Bodereau has taken to the Financial Times this week to suggest BdP is acting with the kind of “populist expediency” more at home in Venezuela or Argentina.

“It is a great shame that five years after the beginning of the eurozone sovereign and banking crisis, the eurozone is still dealing with banking crises in a manner that is inconsistent, unfair and amateurish,” he added. “We collectively – investors, bankers, regulators and governments – should aspire to much higher standards and avoid populist short-cuts that will inevitably result in protracted litigation.”

The most bitter pill of this decision is that Costa chose the five senior bonds very carefully.

Spanish financial journalist Roberto Cardoso explains the bonds are those “governed by Portuguese law, rather than UK or US law” – and so most likely to be held up in courts that could take up to 16 years to decide such cases.

It is an aspect that has not been lost on the rest of the financial world. Moody’s has already given the bond dump a resounding thumbs-down, actually revising downwards Portugal’s already abysmal investment rating.

Fitch too has issued an alert that “the way of dealing with the resolution process raises questions on how the European Union will manage banking resolutions”; while the government is suddenly appreciating the depth of feeling stacked up against BdP.

A spokesman for finance minister Mário Centeno told dinheirovivo on Monday: “The decision is of the exclusive competence and responsibility of the authority of resolution.”

In plain language, this means Costa is on his own.

Certainly Pimco will be putting pressure on the European Central Bank to take a stand. Concluding his FT article, Bodereau said: “If the ECB does not support the Novo Banco action, then there is time for it, as a banking regulator, to take action”.

But if it does support BdP’s decision “or is not able or willing to act, then all investors in European capital markets should heed the warning”, he warned.

As national media explained over Christmas, the reason for the bond-dump lies in attempts to make ‘good bank’ Novo Banco more attractive when it goes up for sale for a second time.

The BdP’s first attempt to auction the bank off that cost €4.9 billion to ‘rescue’ from BES ended in fiasco late last year after none of the companies in the so-called race would meet the BdP’s reserve price of €4 billion.

As the true dimensions of this new ‘banking disgrace become ever more evident, the Associação de Obrigacionistas Sénior Particulares Lesados do Novo Banco is keen to hear from anyone who has been affected. The group has set up a website, and has the email address: obrigacionistasroubados@sapo.pt