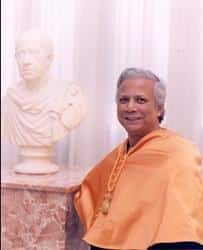 MUHAMMAD YUNUS and the Grameen Bank, which he founded, have been awarded the 2006 Nobel Peace Prize in recognition of their micro-credit lending schemes for the poor. They often lent money to the least well-off members of society, especially women, so they could start their own businesses. Mr Yunus said that he could not be more proud that he has given something to the world. He also said that the bank’s work in creating opportunities for large numbers of people to get out of poverty created the conditions for sustainable peace.