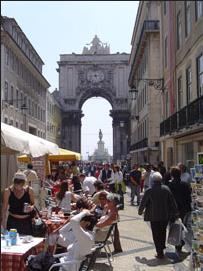 LISBON CÂMARA is to ask the government to suspend a law laid down in the municipal urban development plan (PDM) which prohibits large-scale construction projects and redevelopment in the city’s historic Baixa area.

Initially, the cash-strapped authority is to only ask for permission to develop four projects that it considers to be structural in the area where most of the buildings are Grade A listed.

This would be followed by a second request to the government for permission to extend development plans to other parts of  Baixa.

It will take several years for the revised PDM to be developed by specialists in the field. Under the present PDM, set out 14 years ago, all development and construction works that are not purely “restoration and conservation” are prohibited by law in the historic Baixa area.

According to a report presented last week by Urban Planning Council Executive Officer Manuel Salgado, “considerable parts of Lisbon city centre have fallen into systematic and progressive degradation” made worse by depopulation as people have moved out of the city centre.

The report also talks about buildings “falling into ruins” and commercial activity “slowing down” and the need for “bringing up to date” commercial areas in and around Rua Augusta and Rua do Ouro.

The new projects, which would all be private developments, would bring considerable cash windfalls to Lisbon Câmara which is struggling with its financial commitments.

The câmara wants the government to decree that the Baixa Chiado area should become “a critical area for urban regeneration and re-conversion” and give it preferential rights with regards to real estate transactions to be carried out there.

Four projects already being considered in this new redevelopment regime include the creation of a garden and belvedere with a view over Lisbon’s Baixa at Carmo aimed at breathing new life into that area of the city.

The space would be gained by demolishing the rundown annexe buildings currently occupied by the GNR Headquarters near the current Santa Justa elevator and Carmo Cathedral ruins.