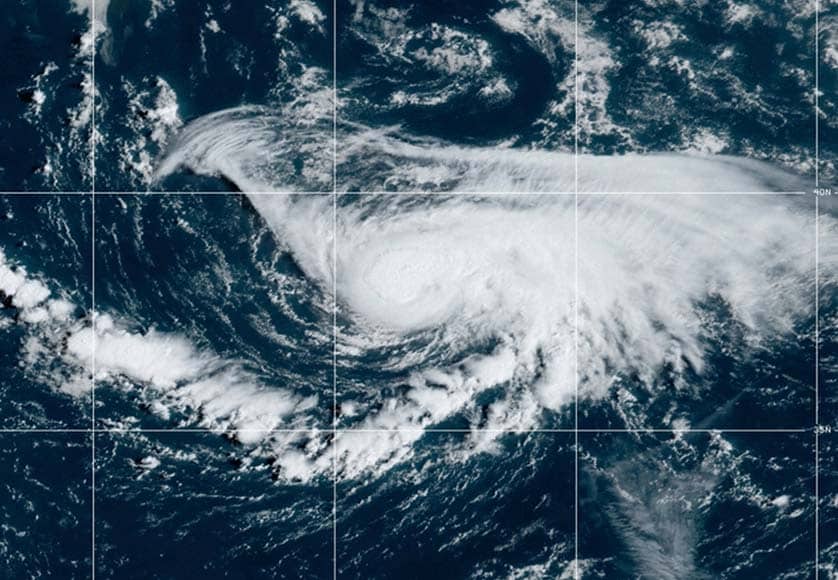 Tropical storm Danielle, currently located northwest of the Azores archipelago, has changed trajectory and is on its way to Portugal.

Rain and high winds should be hitting mainland territory by Sunday afternoon.

As reports explain, Danielle was thought to have been headed for Great Britain, but it has since “taken a turn” and is on its way to a country crying out for rain.

This was the cyclone initially forecast by US meteorologists. It quickly lost intensity, which is why it has been downgraded to a tropical storm.

By the time Danielle reaches Portugal, it doesn’t sound as if she will be hugely threatening. Alexandra Fonseca of IPMA, meteorological institute, has explained that the storm is “losing intensity and will continue to lose it”.

Authorities are nonetheless on heightened alert. Models have “a great uncertainty associated” with what is likely to happen, so “very close vigilance” of this storm is ongoing.

Images published by IPMA show the storm will “integrate with a depression in the north Atlantic” and arrive here as what the experts call an ‘extratropical cyclone”.

The forecast trajectory – “which is still volatile”, stresses Fonseca – indicates that Danielle is headed for the northeast of the Iberian Peninsula “affecting Portugal”.

Everything is pointing to persistent, intense rain from Sunday afternoon.

Amazingly, the IPMA specialist was not dancing a jig of delight as she gave the news, but almost everyone else in the country will be.

Instead, she continued: “The models are showing us a very intense precipitation, wind also will intensify from Sunday, with gusts that could blow up to 40-50 km/h, as much on the coast – with the arrival of the surface front – as on high ground.

“With regard to the wind, the model still has some uncertainty. The precipitation is a parametre that is more consistent”.

The rain will remain in Portugal for some days, she added – and even after Danielle (or what is left of her) passes, the continent will be affected by “very active post-frontal, continuing with rain for the days afterwards”.

Waves will start hinting at the approaching storm from this afternoon, says an IPMA communiqué. Maritime agitation on the west coast could see them reach between 1.5 and 2 metres. From Monday this could increase, seeing waves of between 3.5 and 4 metres.

The beauty of this news is not just that rain is on the way for a large chunk of next week, but that we are being warned about it: time to get in the garden furniture, the hammocks, the inky-dinky wind chimes made of flimsy bamboo; secure anything that could fly about dangerously – and put all pot plants firmly under the mercy of the skies.

The other bit of good news is that “Danielle will not be like Leslie” (Leslie being the strongest tropical storm to hit the Iberian Peninsula in 176 years, which carved a trail of destruction in 2018, killing two people and injuring many others).

“It doesn’t appear to be similar”, said Alexandra Fonseca, referring to the models that show Danielle is losing intensity. “What will arrive here will be a system with other extratropical characteristics – the type of which are already more common along our coast”.

Before Danielle’s arrival, Saturday is looking like a regular day in paradise: clear skies, temperatures varying between 24ºC in northern areas, 31ºC in others and a fairly stonking 36ºC in Évora. Perfect weather in other words, to tidy up outside the house and prepare for the RAIN…