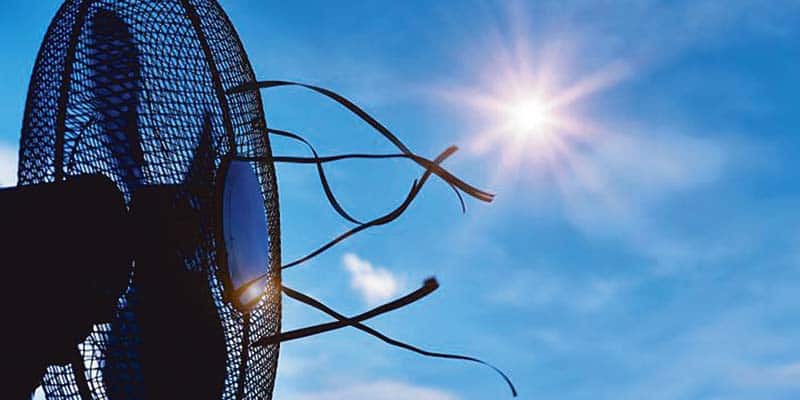 According to some reports, this past month was the hottest July on record in the history of the world. Before that, June was the hottest in Europe ever. However, the month of June was also one of the coolest recorded in Portugal. I, for one, savoured every breezy evening, because I knew our good luck would eventually run out and it would get very, very warm soon enough in our region. After all, Seville, which is known as “the frying pan of Europe”, is only two hours away.

I know, I know, it is summer in the southern most part of Europe and with day after relentless day of bright sunshine, it is reasonable to expect the temperatures to be in the high 30°Cs. Ah, but what about those blatantly high 40°Cs. As an American, I think that using Fahrenheit makes conditions sound even hotter especially when it hits the 100s. Whether you use Celsius or Fahrenheit or curse words to describe the temperature, it won’t take more than one forgetful moment to help you remember to put the reflective sunscreen up in the front of your car’s windshield. I forgot recently and I couldn’t touch the steering wheel for at least 10 minutes before the air conditioning on high cooled things off enough to get underway.

My lovely wife and I lived in Panama for 12 years, before we moved here, so we thought we would be used to dealing with summer in the Algarve. Wrong! First of all, believe it or not, Panama never gets as hot as it does during what is called the high season here on the southern coast of Portugal. I thought “high” stood for the greatest number of tourists and maybe it does, but it also represents the status of the temperature. While tropical Panama never ever cools down and generates plenty of humidity, the thermometer seldom hits higher than the mid-90s (low 30C°s) and up in our mountain house mid-80s (mid-20°Cs). During my last summer visit to Panama, I checked the weather and every day it was 10 degrees hotter on the streets of Faro than on the litter-strewn streets of Panama City. In other words, my lovely wife and I weren’t as prepared as we thought we were.

For example, much of Panama is rain forest so there is plenty of humidity. You could build up a sweat by blinking vigorously. Here on the other hand it is a dry heat. Thus, my lovely wife and I became dehydrated and were so dried out that we were like sand paper but with less energy. Now we take supplements and drink litres upon litres of water each day.

We had to take several steps to cope with what for us was unprecedented heat. The first thing we did was install a ceiling fan in the living room. Why many if not most Portuguese don’t see the value of ceiling fans astounds me. Our living space is a bit too open to efficiently air condition, but the fans keep the area tolerable if not always comfortably cool.

That does not mean we’re too cheap to run our air-con. During most of July and August, the unit in the bedroom is on 24-7. We call our bedroom “the meat locker,” which is where our little dog and we escape to cool down. Okay, we do sleep under a duvet, but I’m not sure we would be able to experience sweet dreams with the window open and a fan on. In fact, we’ve tried it and it doesn’t work.

In addition, I placed two large umbrellas on our terrace. Obviously, these expansive devices provided much needed additional shade for our patio, which sometimes in the afternoon was our own version of a frying pan. However, the main reason I put up these large umbrellas was to shade our actual house, which has wall-to-wall glass sliding doors facing south. During the winter months, these wide windows provide a welcome passive solar effect that keeps our home comfortably warm. Luckily, I realized that what was considered passive in February, would turn into something very aggressive in August. Thankfully, these umbrellas that shade our southern exposure are very helpful in keeping our living space bearable and we still have a nice view of the sea in the distance.

One trick we have learned is that about 2.30 in the afternoon is an excellent time to run errands. Since we’re not Englishmen, we’re mad dogs, and while lots of places are closed for long lunches, the bank, post office and cleaners open up again even though not every one else has yet completed their siestas.

I understand why people go on vacation in July and August. That’s when the kids are out of school and therefore available to accompany their parents on family fun outings. As life-long teachers, my lovely wife and I found those same two months the least attractive time to visit the beach, since we longed for a respite from other people’s children. I don’t know why but some of the younger ones seem to need to scream at the top of their little lungs every time a wave rolls in. The occasional sighting of a college co-ed wandering by in a stylish swimsuit doesn’t compensate for all the times playful youngsters decide to leap over your blanket instead of dashing around it at full speed.

Even if there weren’t dozens of preadolescent boys using your beach umbrella for a football (soccer) goal, while dozens of teenagers serenade you with hip-hop music at top volume on their surprising compact devices, I still don’t enjoy the beach at the height of the summer season. I don’t get a kick out of walking across blistering sand that is so hot that flip flops offer little or no protection. I also always feel compelled to pick up any plastic debris that might have washed up or was inadvertently left behind by caravan loads of sun worshipers.

Even when I slather on sunscreen with a rating of 275, I still get sun burned on my nose, shoulder blades, knees and feet in just a little over a half an hour. It’s simply too (insert descriptive word of your own choosing) hot.

Luckily as a retired, full-time resident of the Algarve, there are other months when my lovely wife and I can visit any one of a number of scenic beaches without witnessing crowds of drunken tourists in thong swim wear relieving themselves in the breakers. Often it’s so hot that you can see an alcoholic mist evaporating off vast expanses of pink skin.

We just skip “high” season at the beach, and instead wait until “out-of-season” to take our pup Fluffy for quiet early morning walks along the gentle ebb and flow of the surf. Naturally, we carry a supply of small biodegradable bags specifically designated to help remove any evidence of our dog’s visit. The point is – we can wait. It won’t be long before the shoreline is not so littered by boisterous people, empty plastic bottles and candy wrappers and most importantly, it won’t be so blasted hot.