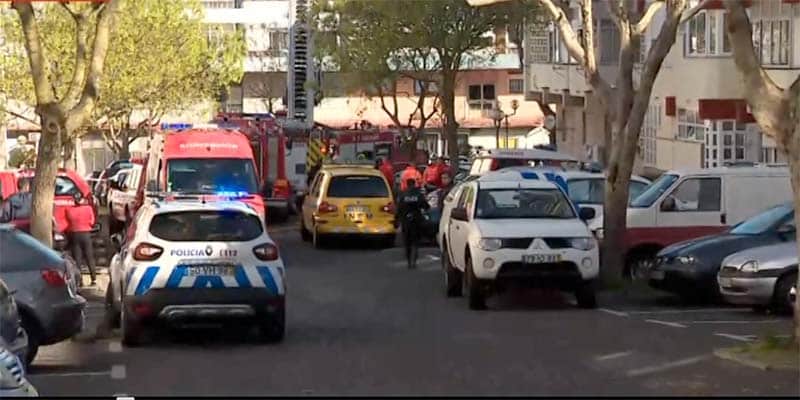 A baby girl died early this morning in horrific scenes as families escaped a blazing apartment block near Lisbon.

The fire was on the ground floor of a three story building, but its effects caused thick black smoke to billow up the building’s stairwell.

It’s unclear from reports this morning whether occupants in other apartments were ordered to evacuate, or whether they decided to do so themselves.

In the panic and confusion SIC television news reported that the one-year-old fell from her mother’s arms, apparently to her death.

Her mother emerged from the building “completely burnt”, say eyewitnesses. She is being treated in hospital and for now there are no further reports on the severity of her injuries.

Also seriously injured were two others, believed to be the mother and aunt of the injured woman.

Three further people – one first described as an eight-year-old child and later updated to an eight-month-old baby – are said to have suffered lighter injuries, while the dead child’s father is described as having leapt from a second-floor window.

All the injured are being treated in various local hospitals.

PJ police are now investigating, both the causes of the blaze (on Estrada Salvador Allende) and the reasons for injuries in people unrelated to it.

An eyewitness has told SIC that one of the occupants of the upper third storey – an 80-year-old man – was the last to emerge from the building, “on his feet and unharmed”.

The fire was called in to authorities at 7.18 and was pronounced extinct at 7.55.