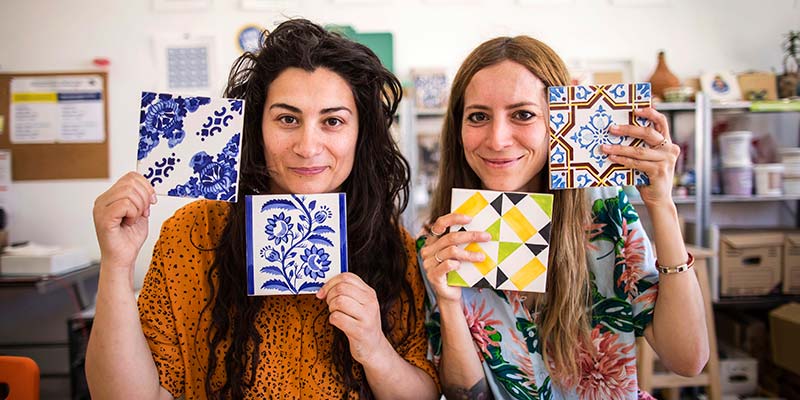 I recently spent an afternoon walking around the small streets of Olhão where there are lots of houses with tiled (azulejo) façades. I thought it would be interesting to start collecting a record of these intricate azulejo designs that create amazing patterns with their bright colours, all so different from each other and which turn houses into works of art.

The word ‘azulejo’ comes from Arabic, meaning ‘small polished stone’. Azulejos were first introduced to Portugal by King Manuel I after his visit to Seville, in 1503, which was then the major centre of the Hispano-Moresque tile industry. Portuguese tiles have been used for over five centuries to decorate the inside of churches and palaces with murals depicting historic, religious, agricultural or mythological scenes. These are a distinctive part of Portugal’s heritage and are still used extensively today to decorate everything from houses and restaurants to train stations – the old Lagos station building is stunning.

From the 1850s, Lisbon’s and Porto’s tile factories began ‘mass’ production using semi-industrial methods with stencils, sponge painting and printing to create patterned tiles which were to be used to cover façades. These were less expensive to make than the individually hand-painted tiles but were expensive and complex to apply around the contours of buildings and so only the more affluent could afford them.

It was in Lisbon’s older district of Santos that tiles were first used as a façade to cover the outside of the houses, not as a decoration but to provide protection from the humidity from the Tagus River.

The use of these façade tiles spread to other neighbourhoods and eventually to the rest of Portugal, becoming part of the country’s urban identity. They also became popular in the Portuguese colonies – Brazil, India and Africa – and with their vast diversity of themes, materials, styles and use, Portuguese tiles became an internationally recognised art form.

Lisbon’s National Tile Museum is one of the most important ceramic museums in the world where visitors can learn about the history and connection between architecture and tiles, and is well worth a visit!

Both Lisbon and Porto have some incredible tiled houses. The most photographed in Lisbon dates from 1863 and was the home of renowned artist Rafael Bordalo Pinheiro (1846-1905) famous for his illustrations and cartoon caricatures. He also founded a ceramics factory in Caldas da Rainha, which is still in use today. On this amazing building situated in the appropriately named Largo Rafael Bordalo Pinheiro, the tiles depict mythological characters to represent Agriculture, Commerce, Industry, Earth and Water. At the top of the building is a star with an eye to symbolise the Creator of the Universe. They are a spectacular work of art.

Sadly, over the years, property owners have removed their tile façades to make way for more modern cladding and painting, and these historically valuable tiles were either thrown away or sold as souvenirs to collectors and tourists. This legacy was being lost, but, in August 2017, a law was passed to protect the tiles and prevent property owners all over Portugal from removing them from their houses. Until then, tile façades had only been protected in Lisbon.

This decree was a result of a campaign by the SOS Azulejo Project (created in 2007) by the Museum of Judicial Police which stores a collection of stolen (and recovered) historic tiles whose original owners are unknown so they cannot be returned. The police set up the project to protect and inform on the sale, theft, vandalism and conservation of Portuguese tiles and to raise the public’s and institutions’ awareness on the importance of preserving this heritage. They were responsible for the creation of National Tile Day on May 6, award prizes for conservation projects and run seminars in schools to educate new generations.

On the sosazulejo.com website, I was amazed to read about the theft of whole tile murals from churches and palaces, and it seems unbelievable that such huge murals could be quickly stripped and stolen. The website’s publication of these murals goes someway to making the resale difficult!

This new law will hopefully prevent the legacy of Portugal tiles from being lost in the future, but, in the meantime, there are individuals who have already started to create tile inventories.

Two friends – Alba Plaza, a Spanish graphic designer, and Marisa Ferreira, a Portuguese cultural producer – started their project called Os Azulejos do Porto (The Tiles of Porto) in 2016 with the aim of sharing and cataloguing Porto’s tile history. They believe there are over 1,000 patterns and always research the history of each tile, the artist, where it was made, the materials used and much more, the details of which can be seen on their website for the 200-plus tiles they have already photographed and includes a map and address of where the tiles can be seen in this city’s beautiful houses.

Alba and Marisa are creating a unique record of Porto’s heritage and want the public to help by informing them of any tiles (in Porto) not already shown in their catalogue so that they can go and photograph and research them. Furthermore, Alba and Marisa run workshops for people to learn more about the history of tile production and participants learn to paint their own tiles using the original methods and designs from 170 years ago. This is a lovely way for visitors to the city to experience, first-hand, some artistic history and to have a distinctive souvenir they created themselves, whilst helping to fund the Azulejos do Porto project.

A few town councils, including Porto and Lisbon, have also begun to create tile banks to preserve the local heritage and property owners may obtain original tiles to restore their façades. However, more councils need to instigate measures to preserve such a beautiful part of Portugal’s artistic and architectural heritage. From now on, I too will photograph any tiled houses that I see and start my own personal photographic record of beautiful azulejos.