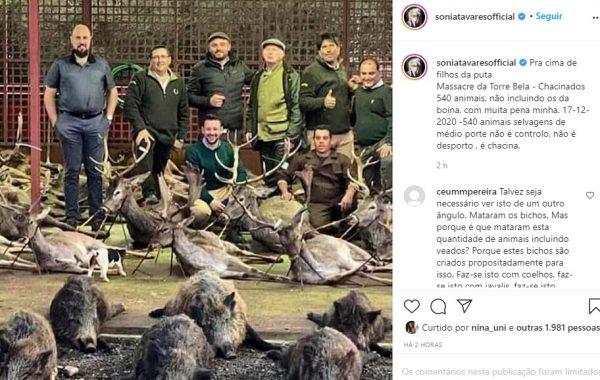 A dispatch from the environment ministry has instructed APA, the Portuguese environment agency, to “immediately suspend” its evaluation of the EIA (environmental impact study) for the project for a massive solar energy park at Herdade (sometimes referred to as ‘Quinta’) da Torre Bela.

The plan is for APA to ‘proceed within the next 30 days with an investigation into the facts that occurred” and assess ‘whether the study should be reformulated’.

In the meantime, the carnage that went ahead under the guise of ‘hunting’ has been splashed across the nation’s media and picked up by international sources, including the BBC.

The BBC highlighted a statement from the Portuguese environment ministry which said the “indiscriminate slaughter” of the animals (mainly deer and wild boar) had “nothing to do with hunting, understood as a practice that can contribute to the maintenance of biodiversity and ecosystems”.

In this case, the exercise appears to have been designed to expunge biodiversity from the ancient walled estate.

But there are still numerous doubts: for example, three days after the furore hit the headlines, the owners of the estate – through media consultants – issued a statement to say they had absolutely nothing to do with the ‘hunt’ which they described as ‘illegitimate’.

“Herdade da Torre Bela firmly repudiates the incorrect, illegitimate and abusive way in which a hunt took place on its property on December 17”, said the statement stressing that the first Torre Bela knew about the barbarity was ‘through the media’.

Promising to collaborate with authorities to find out exactly how the incident took place, the statement went on to say the estate would be “adopting the appropriate judicial measures” in order to be “compensated for all the damages caused by this unfortunate event”.

Journalists’ attempts to discover the identity of the owners of Torre Bela, however, have brought yet more questions to the fore.

It seems the ‘real owner’ could be Isabel dos Santos – the former ‘first daughter of Angola’/ one time ‘richest woman in Africa’ and now immersed in the Luanda Leaks scandal (click here).

Sábado suggests the estate may be fronted by people who represent Ms dos Santos. But no one seems to know for sure.

All that is obvious is that whoever does own Herdade da Torre Bela would like to stay anonymous.