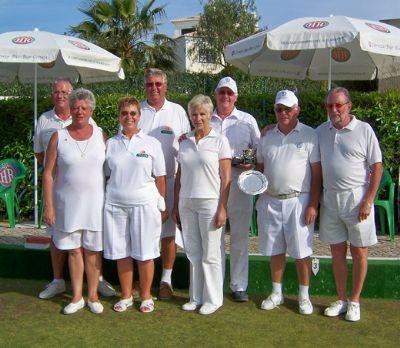 The second Australian pairs bowling tournament was staged at the Alvor Club throughout last week in perfect bowling conditions, with a full entry of 32 pairs competing for the title and excellent cash prizes making for an enjoyable, friendly and competitive tournament.

On Monday and Tuesday there were round robin group matches, eight groups of four teams each playing three qualifying matches, Wednesday was a rest day and Thursday saw the eight group winners do battle in the quarter finals, the remaining twenty pairs going into the attractive plate competition.

In the quarter finals, Alan Clarke and Ian Watson beat Jan Reinders and Saskia Schaft from Holland by 24-16, both having won all three of their qualifiers while Geoff and Liz Cole from Jersey lost to Chris Reynolds and Ian Watson from Sussex in the UK by 22-9 and Brian and Lesley Walker from Alvor defeated Ted Vidler and his brother Alan by 17-12.

In the remaining quarter final Mike and Catherine Webb from Alvor beat club mates John and Cristina Laskey by 22-12.

The semi finals and final took place on Saturday April 4 and Mike and Catherine Webb continued their excellent form, beating Alan Clarke and Ian Watson by 22-12 in the first semi final, while Brian and Lesley Walker beat Chris Reynolds and Terry Hughes by 15-10 in the other.

The plate was played over Thursday and Friday, twenty pairs each playing two games, the four pairs with the best record to progress to the semi finals on the Saturday. After some topsy turvey scoring in the qualifying rounds, the four qualifiers were John and Jean Wilkinson, John Jones and Paul Johnson, Seamus and Paula Montgomery and John Denn with Tom Sanderson. Seamus and Paula defeated John Denn and Tom Sanderson by 21-17 in a close and fluctuating semi final game while John Jones and Paul Johnson beat John and Jean Wilkinson by 18-12 in the other.

The main event was an enthralling match eventually won by Mike and Catherine Webb, defeating Brian and Lesley Walker by 19-14.

In the third and fourth place playoff, Chris Reynolds and Terry Hughes took five shots on the last end to squeeze home by 17-15 over Alan Clarke and Ian Watson. The plate final was a good win for Paul Johnson and John Jones over Paula and Seamus Montgomery by 21-9.

The competition goes from strength to strength and entries for next year are already being received. We hope to continue to provide top quality bowling played in a competitive yet friendly spirit and next year should be an even bigger and better event than this year.

Our grateful thanks to competition organisers Connie, Paul and Alan and to all those that gave their time and energy so freely to make the week so successful both on and off the green, special thanks to Connie and all her staff and helpers at the Alvor club for the use of the excellent facilities and for the marvellous catering throughout the week. Here’s to next year.