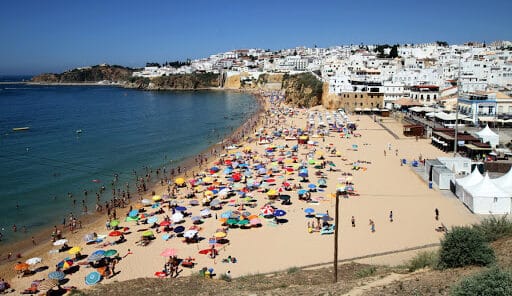 August’s figures for national tourism were ‘off the scale’: an historic maximum of 4.2 million hotel/ accommodation bookings.

The data, published today by national statistics institute INE, shows the Portuguese responded en-masse to the country’s call for ‘staycations’ to try and help the pandemic-strapped economy.

Yes, overall, the picture remains well below the touristic buoyancy of 2019, but the one golden month worked wonders for the struggling hotel industry.

Say reports, August’s figures were up even on pre-pandemic levels: there were 22% more overnight stays this year than in 2019, and 24.2% more on than registered in 2020.

Once one considers the rest of the year, the results however were less than half those achieved before the pandemic – though better than 2020.

It’s really up to the industry how the data is interpreted. It’s not good, but signs are that things are improving.

Meantime, minister of economy Pedro Siza Vieira has announced that in spite of the recovery underway, new financial support mechanisms will be made available.

He told a meeting organised by the Portuguese Confederation of Tourism earlier this week: “We are going to launch a new credit line of support next week”.

The line will have a value of €150 million, reports ECO, and will “reinforce” support already in place.

It will be most focused on medium-sized and large businesses, said the minister.

Brussels has also given the green-light to Member States continuing grant-funded support programmes until June of 2022.