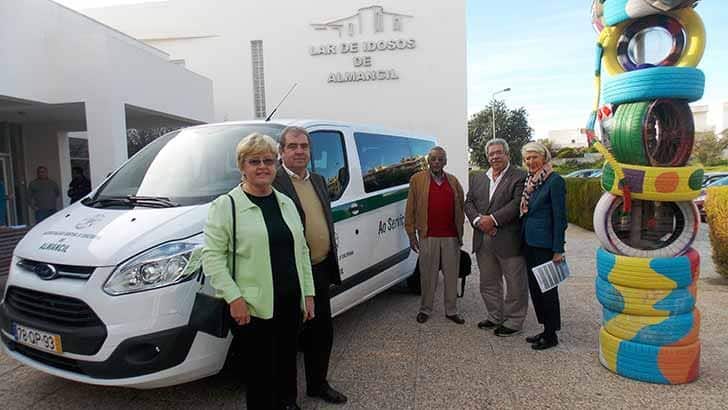 A new nine-seat people carrier was donated to Almancil social and cultural association ASCA which cares for needy residents in the local area.
For some time, ASCA needed a new passenger transport to replace its existing aged and hard-to-maintain vehicle. The Wolf Valley Charity agreed to underwrite the cost of a new vehicle.
ASCA was founded in 1992 initially as a day care centre for the elderly, but developed to provide support to other needy residents who live in Almancil.
António Tá Certo seafood restaurant at Praia do Garrão, near Vale do Lobo, offered to host a dinner at no cost to the Wolf Valley Charity with the money raised to be used for the new vehicle.
Over 70 people attended the evening raising €5,000. Additional funds were raised by ASCA and the Loulé Council. In all, the new Ford Transit Combi cost €20,000.
At a ceremony at ASCA, the new vehicle was formally handed over and blessed. Among those present was Loulé councillor João Martins, Sergeant Carvalho, Commander of the Almancil GNR station, José Humberto de Sousa, President of the ASCA General Assembly, Hermes Alberto, President of the ASCA Board of Directors, Fr. Jorge Carvalho, Almancil Parish priest, Paulo Chaves, President of the Wolf Valley Charity and members of the committee.
Councillor João Martins stated that ASCA serves as a cushion for the social needs of the Almancil Parish and provides “a great degree of happiness for many people”.
In 2011, ASCA opened its new residential home for the aged with accommodation for 30 people. The home is also fully equipped with rooms for physiotherapy and medical treatment. The Wolf Valley Charity Fund (WVCF) donated €70,000 towards the cost of furniture for the new home.
The WVCF was founded in 1999 by a group of Vale do Lobo residents with the aim of supporting local Portuguese charities and people in need, including the disabled, the underprivileged and socially deprived. The WVCF has since raised well over €900,000.