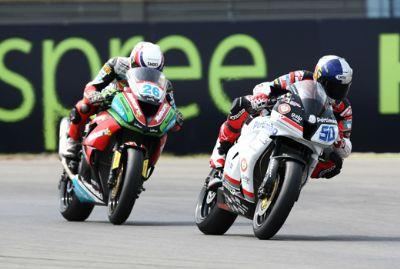 Eugene Laverty scorched to Parkalgar Honda’s second victory of the current Supersport season in Holland on Sunday to take second place in the overall standings.

The Northern Irish rider, only in the services of the Portimão-based team since this winter, already proved his talent with a win in Qatar and again waited until the last lap before nosing ahead from a tightly packed group to score by 0.107s from championship leader Carl Crutchlow.

In contrast, team mate Miguel Praia was forced to retire four laps from the end with mechanical problems when still in contention for a points finish. Parkalgar Honda’s explosive start is set to continue in Monza on May 10 for the 5th round of the 2009 title race.

The Algarve Motor Park was also one of two Portuguese tracks to welcome Aston Martin on Wednesday and Thursday (yesterday) of this week – the prestigious British manufacturer tested its 24 Hours Le Mans car ahead of the new season before working on further improvements in Estoril.