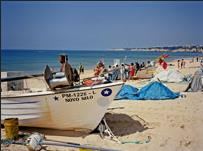 A NEW DEVELOPMENT is to be built in front of Armação de Pêra beach, close to the football field.

Banha & Viegas, based in Quinta do Lago, is the owner of the project and Cerro Novo, a local real estate company, is to begin promoting the development in the international market from May.

The project has already been approved by Silves Câmara, but construction work is still awaiting a few last minute changes before machines start digging the foundations before the summer.

Set in an area of 30,000 square metres, the project includes a total of 300 one bedroom, two bedroom and three bedroom apartments, all with terraces either facing the beach or the Ribeira de Alcantarilha, a protected area used for nesting by many species of birds, which borders Golfe dos Salgados towards Albufeira.

According to Edward Roberts from Cerro Novo, construction will only take place along the Avenida do Rio up to the roundabout in what is classified as “the urban area for Armação de Pêra, leaving a huge parcel of the development for the creation of gardens and public areas, namely a car park for people visiting the beach and pedestrianised areas in wooden slats”.

The Ribeira de Alcantarilha’s natural landscape is one of the strongest aspects for the promotion of the project, because no other construction will be authorised in that protected area.

The project is to be developed in three different stages over the next four years and the promotional campaigns will follow as construction progresses, although many of the apartments “are already reserved”, says Ana Amorim from Cerro Novo, who emphasises the “high quality of the project”.

The gardens included in the project are planned to be developed as an extension of a larger plan that aims to revamp Armação de Pêra’s entire beachfront. The public tender for this project was announced by Silves Câmara President, Isabel Soares, in January, with an estimated cost of six million euros.

The Armação de Pêra revamping project was originally presented in 2002 by Silves Câmara but its approval by the Municipal Assembly is only dated from January 26, following a long public debate resulting in several changes to the original project.

The modernisation of the beachfront includes more green areas, a cultural facility with library and auditorium, a new coffee shop and esplanade and, eventually, a museum. The replacement of the sewerage and water supply systems, the enlargement of the pedestrian areas between the Hotel Garbe and the fishing dockside are also included in the plan.

This work is expected to start in September so that all is complete by the end of 2009 – the same year that the new development’s first apartments will be ready, according to Cerro Novo.

Do you have a view on this story? Email: editor@portugalresident.com
1″>news