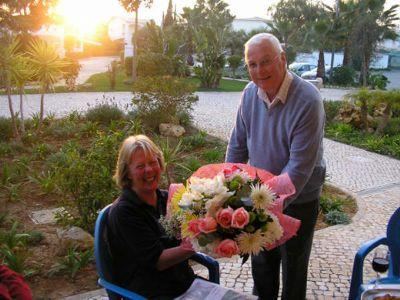 Linda Pixley, President of the Association for the Protection of Animals in the Algarve (APAA), retired after nine years as president from the board to make way for new president Alan Camplin-Smith on February 22.

“We owe a great deal to Linda for the way in which she has served the Association over the years and we are grateful she will continue to help us on educational and other issues,” said Alan Camplin-Smith, who moved to the Algarve in 2002 after working as a company secretary of a FTSE company.

Founded 10 years ago by Verna Kinder and Frank Gerhard, the APAA animal centre in Portimão has been taking animals from across the Algarve and re-homing the animals with new families within three months of first arriving at the centre.

The challenge of the new board will be to find new premises and raise the funds needed for this.

“As for the future, without facilities currently to take in dogs, we will be extending the SNIP (Spaying and Neutering in Portugal) scheme and education programme, while fundraising for new facilities and kennels,” added Alan Camplin-Smith.

Although behind the scenes things may have changed at the APAA, the work undertaken by the charity will carry on with quiz nights, a beetle drive and karaoke fundraising evenings as well as the return of the Scruffts competition scheduled for this autumn.

Other new members of the board include Sheila Buckley as treasurer, Pam Pressey as secretary and Pat Camplin-Smith as membership secretary and APAA News Editor. Stuart Buckley, Ray Pittar and Sheila Browne were all elected to the Fiscal Council.

For further information about the APAA, please email apaaportugal@hotmail.com.