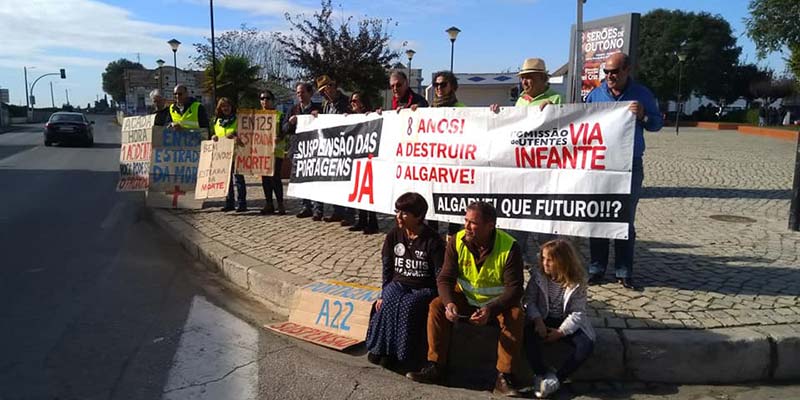 Algarve’s anti-toll group CUVI (Comissão de Utentes da Via do Infante) took to the streets on Sunday (December 8) to once more call for an end to the A22 motorway tolls.

The protest took place in Luz de Tavira and was attended by around 15 people, led by Algarve MP for Bloco de Esquerda (BE) João Vasconcelos, who wore fluorescent yellow vests and held up anti-toll signs. It was held on the eighth anniversary of the introduction of tolls on the motorway.

Protestors believe that the tolls have led to an increase in road deaths on the region’s only other alternative – the EN125, dubbed by the group as the “road of death”.

Speaking to national news agency Lusa, Vasconcelos pointed out that there have been 9,921 road accidents in the Algarve between January 1 and November 30, 23 more than the same period last year. The number of people who sustained serious injuries also increased by 19.

He also called attention to the fact that nearly 40 people have been killed on regional roads in the last three years and accused Prime Minister António Costa of failing to keep his word, as in 2015 he said that the EN125 was a “cemetery” and that he planned to abolish the tolls when he took power.

Vasconcelos also criticised most of his fellow MPs who have voted against the over 10 proposals to end the tolls in the region.

The MP also highlights the impact that the tolls have on the local economy, adding that it is the motorway’s concession company that benefits the most from the current scheme by “receiving €40 million from the government and €30 million from toll revenue”, which he considers “immoral and a crime”.

CUVI is also fighting for the “definitive and complete renovation of the EN125”, which still awaits much-needed roadworks on its eastern section between Olhão and Vila Real de Santo António.