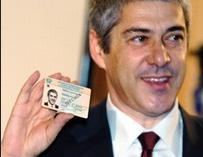 BY INTRODUCING the new Cartão do Cidadão (Citizen’s Card), the government will achieve one of the principal objectives of its strategy to modernise administration at a technological, procedural and legal level.

The Minister for Internal Administration, António Costa, has announced that a pilot scheme for the card, which essentially offers five documents in one, will be launched in the Azores later this year and will be introduced throughout Portugal in 2007, at a date to be confirmed. By introducing this single identity document, Costa explains that it will do away with around 40 million cards currently issued by public administration services.

The new card will undoubtedly make life easier for citizens, as it will mean they no longer have to carry with them so many separate documents or go through the time consuming process of applying for them or having them renewed. The card works in a similar way to a Multibanco card, containing a magnetic strip, chip and pin.

Other benefits being promoted include the fact that the new card will provide greater security in the identification of citizens. The new identification system will bring Portugal up-to-date with the requirements of the European Union and facilitates the use of electronic services, with the support of authentication through digital signatures. The system also contributes to the improvement of public services, aligning modernisation of administration with technology and, very importantly, rationalising resources and costs for the state, citizens and companies.