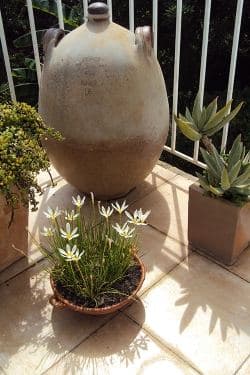 The tournament this year attracted the biggest ever entry, with 40 pairs from various parts of Europe taking part in the main competition and non-qualifiers then went into the Plate Competition later in the week. Total prize fund this year was a record at €3,600.

There were 10 groups of four pairs playing a round robin basis of 18 ends each match. The 10 winners plus the best six runners up went into the last 16, which then became a straight knockout tournament.

Some excellent bowling through the early part of the week saw 16 pairs qualify, including all three winners of the previous three tournaments, John and Chrissie Laskey, Mike and Catherine Webb and Alan Clarke and Ian Watson, last year’s winners. The last 16 on Thursday morning saw eight pairs qualify for Friday’s quarter finals.

The quarter finals drew a healthy crowd who enjoyed all four matches. Chris Panther and Barry Holbrook from Essex defeated local fancied pair John and Maggie Dance by 22-8. John Jones and Meurig Evans had been playing well all week and had a titanic battle against another Essex pair of Ian Christey and Martin Heath. This went to an extra end which enabled Ian and Martin to edge home. In the third match, Geoff and Liz Cole from Jersey defeated locals Geoff and Judy Drewer 24-7 and finally holders Alan Clarke and Ian Watson defeated Catherine and Mike Webb by 32-6 in very tricky conditions.

The semi-finals were played on the Saturday morning and Liz and Geoff Cole continued their good form defeating Alan Clarke and Ian Watson by 17-15 on another difficult rink, thereby snuffing out Alan and Ian’s hope of retaining the title. The other semi-final was also a tense affair which saw Ian Christey and Martin Heath narrowly defeat John and Maggie Dance by 22-20 to go through to their first final.

Despite staging a valiant comeback, Liz and Geoff Cole finally went down to Martin Heath and Ian Christey by 19-18.

The third and fourth place play-off was won by Ian Watson and Alan Clarke who came from behind to edge out John and Maggie Dance 14-13 after 15 hard fought ends.

All pairs not qualifying for the last eight were eligible for the Plate competition, in which each pair played three games of nine ends each, the four with the best records progressing to the semi-finals and final, to be played over 15 ends on the Saturday. After much tense arithmetic, the four qualifiers were Terry Hughes and Malcolm Peters from Sussex, Terry Ewart and Colin Skinner from Essex, John and Chrissie Laskey from Alvor and Angie Fish from Alvor with Jenny Jones from the Valverde club. Angie and Jenny have played well together in each game and continued this with an excellent win over John and Chrissie Laskey by 16-13 to reach the final. In the other semi, Terry Ewart and Colin Skinner proved too strong on the day for Terry Hughes and Malcolm Peters, winning by 20 shots to 7.

The final saw Terry and Colin claim the Plate title with a 20-13 victory over Angie and Jenny.

In conclusion then, a memorable week and an excellent tournament, which continues to stake its claim to be the best quality competition on the Algarve. Once again thanks to Connie and her team at the Alvor Club for looking after everyone so well throughout the week and for the excellent organisation and smooth running of the competition. We are already starting to plan for next year, when the Tournament promises to be even better for everyone.