The Algarve Archaeological Association (AAA) will be presenting two lectures, in English, on Tuesday, January 10, by Humberto Veríssimo and Beatriz Pinto.

Humberto Veríssimo will be presenting his part of the lecture ‘The Dog and Human Societies: Companion Animal or Something More?’. Zooarchaeology as an area of ​​study encompasses a set of issues that is increasingly more comprehensive and wider than just the study of dietary practices.

In this context, a set of canids (dogs) recovered from archaeological contexts of Roman chronology will be presented, all of a coastal nature, in which fishing activity and garum production were present.

Since the most remote times of human memory, canids, after their domestication, have been used to assist man in many varied activities such as pastoralism, hunting and even fishing.

Considering that the individuals presented in this lecture were found in fishing contexts, we intend to try to understand how these animals lived and what their roles would have been in the human society in which they were living.

In the case of the specimens from Boca do Rio, they present bone pathologies that may have been the result of the activities in which they were working. A set of comparative data is presented that may help to understand their appearance, size and weight, amongst other morphological attributes.

Beatriz Pinto will be presenting her part of the lecture ‘Analysis of shell and mammal finds at an excavation in Faro from Roman and modern times’. She will be talking about an archaeological investigation that was undertaken following the demolition of an old building at the Avenida da República in Faro prior to the construction of a new building.

The archaeological survey revealed deposits from the Roman and modern periods and produced artefacts including mammal bones and seashells. Beatriz will be describing the finds and what they reveal about the site.

Humberto Veríssimo has a masters degree in Archaeology from the University of the Algarve (UAlg) and is currently working on his doctoral thesis. He has volunteered on many archaeological projects in the Algarve and in Portugal. In recent years, he has been the coordinator of the archaeological projects at the Sítio do Castelo do Alferce, Monchique, and at the Sítio do Poço Antigo, Cacela Velha. In addition to that, he is helping the AAA by producing the beautiful posters for the lectures.

Beatriz Pinto has a degree in Cultural Heritage and Archaeology in which her thesis dealt with the shell and mammal finds recovered during an excavation in Faro. She has been a volunteer in several archaeological excavations in the Algarve and is currently head technician of an Archaeological company. 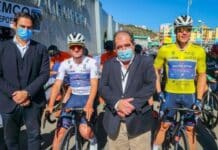