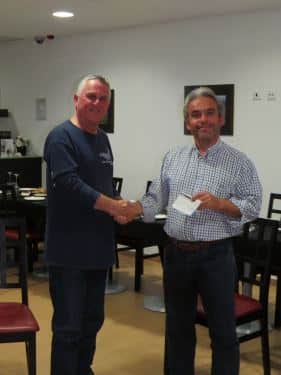 Olhanense fans travelled to the picturesque town of Aveiro to watch their team take on Beira-Mar in a vital Liga ZON Sagres match at the weekend.

A run of six games without a victory, and only three points gained, had left the Algarve side desperate for at least a point to keep clear of the relegation dog fight.

With regular keeper Ricardo Baptista sidelined due to irregularities with a recent drug test, it was down to Tavira born Bruno Verissimo to make only his second start of the season.

And it was Bruno who kept the visitors in the game with two world class saves from Andre Marques and Wilson Eduardo inside the first ten minutes.

A few minutes later and, with virtually their first attack, Olhanense should have taken the lead. Skipper Rui Duarte whipped over a cross that found the head of Dady but a deflection by Beira-Mar defender Rui Rego diverted the ball onto the post.

Midway through the half Jorge Gonçlaves pulled up with a hamstring injury and was replace by Carvajal.

How Olhanense miss Jardel, who was transferred to Benfica in January. The young central defender was in fine form in midweek as they beat PSV Eindhoven 4-1 in the first leg of the UEFA Europa League quarter-final.

With Brita-Mar pressing forward at every opportunity, Olhanense were thankful to reach half-time with a clean sheet. The visitors were much more positive in the second period and should have taken the lead but once again poor finishing proved costly.

On the hour mark a long through ball from the impressive Artur dissected the Olhanense defence and Wilson Eduardo easily beat the advancing keeper to slot the ball into an empty net.

Toy replaced Mauricio and his deft footwork out on the left went to waste when the final ball was over hit. With ten minutes to go Beira-Mar substitute Wang Gang was shown a straight red card for a two footed lunge at Suarez.

Despite intensive pressure in the closing minutes, the visitors could not prise open a resolute home defence.

Olhanense now have four games in which to secure the three points that should secure their future in the top flight.

Tomorrow (Saturday) Olhanense entertain P.Ferreira at the José Arcanjo Stadium, Olhão kick-off 7.15pm. The match is live on Sport TV.  P.Ferreira were thrashed 1-6 at home by Rio Ave at the weekend. Next weekend P.Ferreira meet Benfica in the final of the League Cup.

Last week’s edition of TV MAIS carried a three-page feature on the Olhanense expat fans who, together with their Portuguese friends led by João Ferreira, follow their adopted team all over Portugal.

Ferreira and Os Gorilas are welcomed wherever they go and deep bonds of friendship have been formed.

Sporting Club de Olhanense was founded on April 27, 1912 and during the next months there will be many events to celebrate a 100 years of sporting service to the community of Olhão. Tomorrow (Saturday) officials and supporters will be at the stadium for the raising of the flag at 10.00am followed by a visit to the Cemeteries of Olhão to pay homage and lay wreaths at the graves of former Presidents of the club.