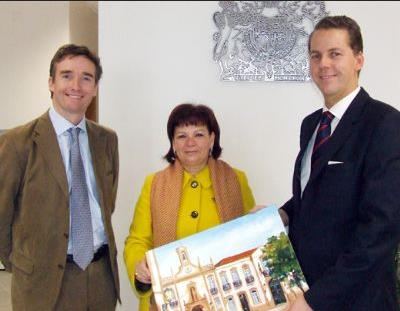 Civil Governor of the Algarve Isilda Gomes visited the new British consul offices in Portimão on Tuesday and was shown around the facilities by both Paul Rodwell, British Consul in Portimão, and British Ambassador Alex Ellis.

The Civil Governor congratulated both on the new premises situated on the riverfront in Portimão and presented them with a hand painted picture of her own offices in Faro. Alex Ellis told the Algarve Resident: “Both ourselves and the Civil Governor are working towards a common goal of providing services for British people in the Algarve.

“This new consul is testament to the British government’s commitment in the Algarve.”

Paul Rodwell revealed that they, and the Civil Governor, had been discussing at length concerns regarding elderly British residents in the Algarve and were looking to the Portuguese authorities to support and enhance facilities available to the elderly in the region.

“We are trying to accelerate the level of help available to the elderly in Portugal and the Algarve,” he said.