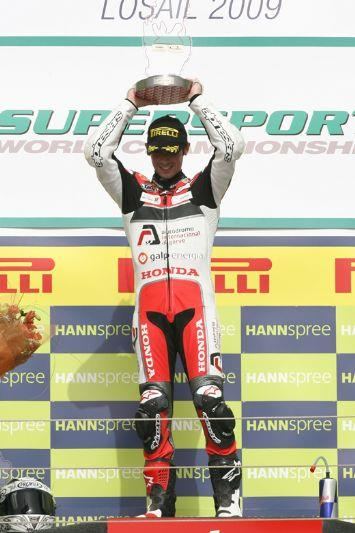 When Parkalgar managing director Paulo Pinheiro first muted the idea of building a racetrack in the Algarve almost ten years ago, winning a world class event on two or four wheels was a distant dream.

Last weekend Northern Irish rookie Eugene Laverty led the Portimao-based Honda team to its maiden World Supersport victory in Qatar and afterwards chief of operations Simon Buckmaster said: “I cannot thank our sponsors enough, in particular Paulo Pinheiro at the Parkalgar circuit, because without him none of this would be possible.”

The second stage of the 2009 world championships, which reach their climax in the Algarve later this year, saw a promising start for local supporters when Laverty scorched into second place behind Cal Crutchlow during qualifying, relegating past and present Ten Kate world title holders Andrew Pitt and Kenan Sofouglu to the second row of the grid.

Riding only his second competitive race in this class, the 22-year-old then proceeded to lead for 13 of the 18 Losail laps before producing a decisive burst to snatch victory from the Dutch team’s pair on the line.

Afterwards the new star dedicated his win to former Parkalgar rider Craig Jones, who tragically lost his life following a crash at Brands Hatch last year, explaining that it was he “who did all the work bringing the team to this level”.

Albufeira’s Miguel Praia started in 14th place after losing traction twice during qualifying and did well under the circumstances to come in 12th. Both he and Laverty, now a close third behind Pitt and Sofouglu in the overall standings, will relish the opportunity to build on their achievements to date at the competition’s third round which takes place in Valencia, Spain, on Sunday, April 5.