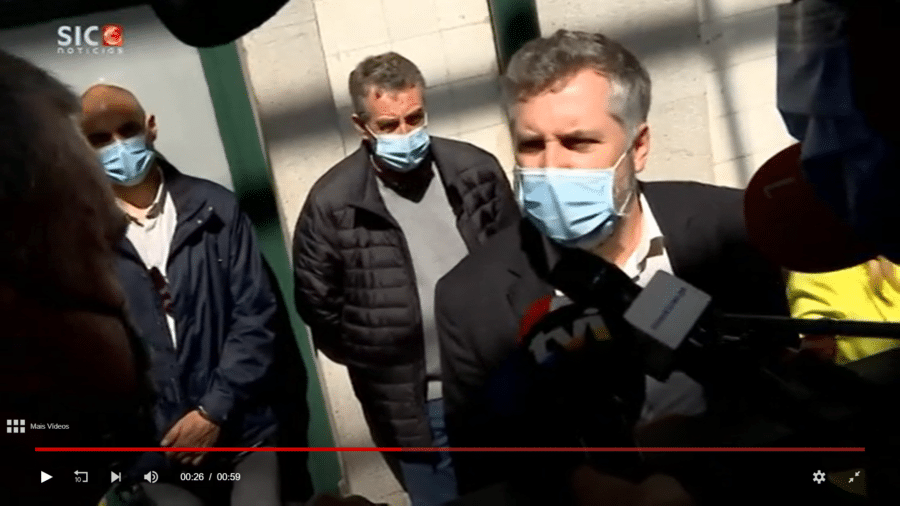 Tomorrow (April 27) sees the next ‘evaluation’ of the virus outbreak situation in Portugal.

With 43 boroughs’ current ‘day-to-day’ on the line (click here), there is enormous frustration at how formulae are being used to assess whether businesses can reopen or stay open. Many consider the formulae ‘make no sense at all’.

In the meantime, authorities are being faced with increasing anger in border areas, like Valença in the Alto Minho, where strict limitations on traffic to and from Spain has seen business plummet.

Indeed a protest is taking place today as António Costa visits the Alto Minho region to inaugurate the electrification of the Minho line. People simply cannot see an end in sight to all the obstacles in everyday life.

“Open the frontiers, we want to work” is the rallying cry.

Protestor Mário Silva has explained: “We cannot see when the frontiers will be allowed to reopen. The country is deconfining but we are starved of oxygen up here without our Spanish clients, who are our best market”.

In the Algarve – after 14 months in which the rural borough registered very few cases, Aljezur has suddenly been hit with an outbreak among immigrant agricultural workers.

There are currently 32 active cases in the borough that ‘on paper’ has less than 6,000 inhabitants.

These workers “don’t count for numbers of the population”, explains Mayor José Gonçalves. “But they count when it comes to cases…”

On the basis of the currently-used formula, Aljezur is registering an incidence of 500 cases per 100,000 inhabitants, and thus risks being ‘sent backwards’ in its deconfinement just two weeks after restaurants and shops finally reopened in any meaningful form.

Notwithstanding the fact that none of the cases detected appear to have developed into any serious form of illness, Mayor Gonçalves’ point is that authorities cannot have it both ways: either population numbers are brought up-to-date to truly represent an area, or ‘case numbers’ have to be put into some kind of perspective.

In this case, no-one appears to be ill and the outbreaks have been identified and controlled.

Indeed police are outside the immigrants’ quarters every day to ensure they do not venture out, while DGS personnel are ‘on the ground’ testing and checking.

“The virus is not being disseminated by the population”, insists the mayor.

Another irony is that almost every one of the agricultural workers works outside the borough, on agricultural projects in neighbouring Odemira.

Odemira too has been hammered for the same reasons: businesses cannot operate yet everyday citizens are all virus-free and desperate to move on with their lives.

It’s a ‘huge confusion’ – but for businesses struggling to survive any further delays in the drip-drip of Portugal’s deconfinement could mean the difference between survival and bankruptcy.

Meantime, in the countries’ universities, professors are said to be considering strike action unless they are fast-forwarded for vaccines.

What has happened with higher education is that it ‘missed’ the priority roll-out for teachers in 1º, 2º and 3º Ciclo schools (as universities and colleges were still closed at the time).

Now they have reopened, but none of the staff involved are being offered vaccines.

CRUP, the Council of Portuguese University deans says “there is no scientific reason that justifies the option to prioritize the vaccination of professionals in just some levels of education… The risk of transmission of SARS-CoV-2 is similar in any class”. Indeed, it was in universities that the first cases of infection in the ‘scholastic context’ were registered.

In today’s Correio da Manhã, there is even talk of a hunger strike to win the chance of vaccines, as promises for regular testing don’t appear to have got off the ground.

Conversely, Portugal’s overall picture could hardly be ‘better’ – particularly if set against situations in other countries of Europe.

Last night on his regular slot on SIC evening news, commentator Luís Marques Mendes said Portugal was “an oasis” right now: “We have been the best country in Europe for a few weeks”, he said, but of course ‘there is no reason for complacency’…