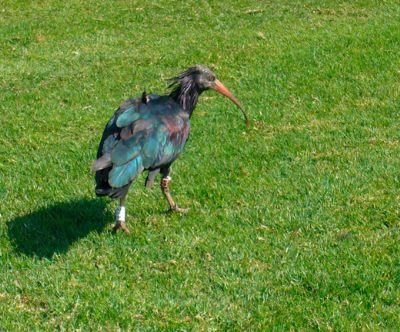 It was a rare birdie for local resident Tony Purbrook when he sighted and photographed a Northern Bald Ibis at Salgados golf course earlier this month.

The bird, which is black with iridescent tints of blue, green and copper, has a featherless face and crown and a long decurved red bill.

According to Science Daily, the species was once widespread across the Middle East, northern Africa and the European Alps, although numbers of the bird have now decreased to such a level that the Ibis is now classified as critically endangered by the World Conservation Union.

An international mission to save these rare birds and to track their migration routes using satellite tags has been launched but the birds are currently enjoying the manicured fairways at Salgados and seem quite at home mixing with competing golfers.