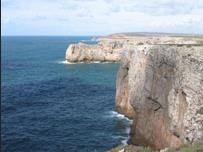 In this monthly travel feature, Paulo Silvestre takes readers on a guided tour to visit Sagres in Portugal. Paulo provides inside information and useful tips to assist you in planning relaxing trips and enjoyable days out. You’ll discover the best of Portugal and enjoy celebrating its unique culture! Paulo holds a degree in Media Studies and his hobbies include playing in a band.

SAGRES DATES back to the time of the Roman conquest and is the most western town of Europe. Its history is influenced by Infante D. Henrique, the navigator, the man behind the Portuguese Discoveries who was known to have a navigation and seamanship school in the Sagres periphery.

The Sagres area enjoys its own mini-climate. Is has very little vegetation and is mainly rock based. However, in the northern area of the town you can find 25 varieties of wild orchids. With this scenery as a backdrop its history was born: botanists and bird watchers used to visit to observe the fauna and flora.

In the old days (sixth century BC), people said that this place was dedicated to Saturn, a European point which enters the salt waters of the Atlantic Ocean.

Fortress‘If you go to Sagres just for a quick trip or to spend one or two days, an essential place to visit is the Fortress’

If you go to Sagres just for a quick trip or to spend one or two days, an essential place to visit is the Fortress, also known as Sagres Castle. It is situated in the south-west of the Algarve, in a dominant position. On this windy sharp cliff, the visitor can enjoy a dazzling view along the coast, the end of Cape St. Vincent (south-west extreme of the European continent) and the vastness of the Atlantic Ocean.

Sagres Fortress, which still stands proud and imperious, was built on the orders of Infante D.Henrique, as a defensive measure. Its origin can be traced back to the 15th century, though it has been the subject of several alterations since that period. Remodelled in the second half of the 18th century, the fortress comprises a 16th century turret and comes under the borough of Vila do Bispo, which boasts one of the largest concentrations of menhir and megalithic enclosures in Europe.

Sagres Fortress is one of 21 national monuments which are all candidates to be included in the Seven Wonders of Portugal.

In terms of gastronomy, the local restaurants are well known for their wide range of fresh fish. You can enjoy the luxury of choosing from a vast list which includes sea bream, monkfish, sole, salmon, cod, swordfish, whiting and sardines among many others.  These are cooked in varied forms: roasted, fried or grilled. Besides the fish, there is also octopus and squid, which form the focus of Sagres’ gastronomy. The most popular seafood eaten in the area are oysters, shrimp, crab, mussels and barnacles.

The traditional regional desserts are almond, fig and egg based. If you want to taste a traditional drink go for a medronho (brandy) or an aguardente de figo (fig liqueur). They are both very strong drinks … you have been warned!

Besides all of this, Sagres has the best beaches and offers great conditions for surfing,  body boarding and the like. However, don’t ever enter the sea by yourself if you’re not an expert because the waves are very strong and it’s really dangerous. Get in contact with a qualified instructor or teacher. You can visit www.sagres-surfcamp.com to get more information about classes and how to begin a sports activity that gives you direct contact with the ocean and its strength and splendour.

So, if you like to see the sea or simply enjoy a good fresh breeze, Sagres is the place to visit. When you reach Cape St. Vincent you will experience the bizarre sensation of feeling tiny and insignificant due to its sheer opulence.