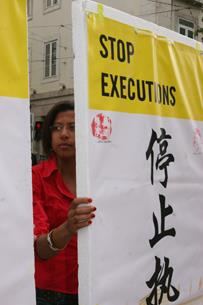 THOUSANDS OF signatures were being collected last week in Lisbon’s Baixa Chiado by the Portuguese branch of Amnesty International demonstrating against human rights abuses in China and Tibet.

Signatories were encouraged to dip a wooden woodcut into traditional Tibetan red ink and print their solidarity with the Tibetan people on a series of screens put up in Largo de Camões.

Once the petition is filled in, it will be handed in to the Chinese ambassador in Lisbon, Gao Keixiang, as Portugal’s unofficial protest to the continued subjugation of Tibetan and indeed Chinese human rights by the Chinese government.

Speaking to The Resident, organiser and representative of Amnesty International in Portugal, Teresa Nogueira, said: “This is not just about the games and if they should be held or not, neither is it just about the plight of the Tibetans, terrible though it is.

“This is about the fact that countless Chinese are being persecuted in China because of their religious or political beliefs and the Tibetan culture, religion, and language are being suppressed and systematically destroyed by the Chinese authorities in Tibet,” she said.

“We don’t take a specific position on Tibet or the Olympic Games, but we do take a position against any regime or country that breaks fundamental human rights, imprisons people for their beliefs or lifestyle, pursues policies of repression, torture and the death penalty wherever that might be,” she added.

Human rights, she said, had nothing to do with the Olympics per say, but she added that many western companies were turning a blind eye to China’s appalling human rights record for the sake of profits and business and added that the open and democratic spirit of the Olympics, founded in antiquity in the world’s first democracy, flied in the face of what the Chinese were doing.

Amnesty International is calling for an independent UN investigation into the events of the last few weeks in Tibet, particularly the sealing off of the region and the long-term restrictions on human rights monitoring there.