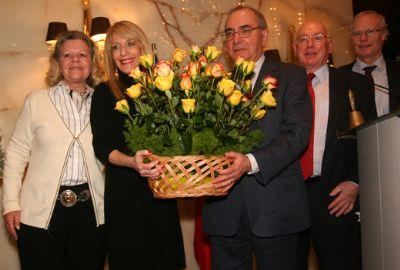 The American Club has made a moving tribute to one of its stalwart members, Dr António Maria Pereira, who recently died after a courageous battle with illness.

António Pereira was the man behind getting the American Club legalised according to Portuguese law in the 1980s.

The well-known lawyer and former PSD parliamentary deputy died at the age of 84 in January this year.

António Maria Pereira, who was known as the “father of animal rights in Portugal”, was born on February 12, 1924, graduating in 1948 with a Lisbon University law degree.

He was a member of the Portuguese parliament between 1987 and 1995 and was also President of the Foreign Business Parliamentary Committee between 1991 and 1995.

Throughout his long and distinguished career he received various awards and decorations, including the Legion of Honour, French National Merit for Economy, Gentleman’s Order and First Class Order of Merit from the Republic of Germany.

In the presence of his widow, Leila Nyrop Pereira, who was presented with a basket of yellow roses which had special sentimental significance for the couple, Executive Director of the American Club, Anne Taylor Grave, made a moving eulogy to a man she said she had admired since she was a girl of nine years old.

Anne Taylor Grave said she met António Maria Pereira in 1970 when her father was General Manager of Mobil Oil and António Pereira had joined the American Club.

“It was always exciting to visit his house because I knew he was famous, and I knew that all the people that came in and out were ministers although I never knew their names,” she said.