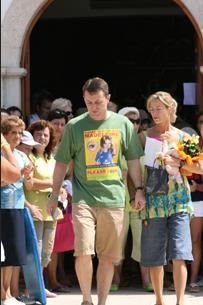 ALMOST EVERY week in the European Parliament, MEPs are encouraged to sign a formal Written Declaration.

There are usually about 40 on the go at any one time, initiated by one or more MEPs and sounding off on some particular issue. They are open for signature for three months, and if they fail to get enough support they are soon forgotten. Most are.

But one such Declaration has already received massive support from MEPs from all political parties and all countries well ahead of time. It concerns missing Children, and calls for the installation of a so-called Amber Alert system.

This would trigger blanket warnings in the media and on motorway signs across the EU, following any child abduction in any one EU country. Since such a system was introduced in America in 2003 nearly 400 children have been recovered, 80 per cent within the crucial first 72 hours.

By mid-July 400 MEPs had signed the declaration. By crossing the magic threshold of half of all MEPs, what began as a simple piece of paper has become an official demand for action. It now has to be formally considered by the governments of all 27 EU Member States.

There will be a debate in September, following which an action plan should be agreed. The French Presidency of the Council has already declared its support, notably because they have had a similar system in place in France for many years: for the first three hours following a reported abduction, television broadcasts are interrupted every 15 minutes.

There are no comprehensive figures on the number of children missing within the EU, but it is well known in Brussels that four new cases are reported each day in Belgium alone. It is also known that such news never travels beyond Belgium, because so far there is no agreed system in place to report it. All this may be about to change, as a result of this particular declaration committing EU countries to work together in a vital common cause.

But the real credit for any change should not go to MEPs but to two very special people, Kate and Gerry McCann. They have not only been tireless in trying to find their own child: they have also been working actively with the European Parliament to ensure that other parents avoid similar suffering. The result should be new EU legislation.

Some may complain that this will override national laws, such as those in Portugal preventing publication of what a child was wearing, or those in Germany covering privacy and data protection. But this is a perfect example of how one simple new law across Europe can hopefully help parents – and children – lead more secure lives.