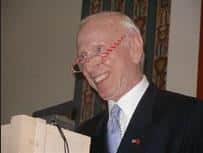 His speech at the Cultural Centre in Bélem on November 10 was for 250 students from Germany, Hungary, Italy, Portugal, Norway, Romania and Spain from 15 international schools participating in the IMUN, which ran from November 9 to 11.

“Diplomacy can be hard work and requires a range of special talents and skills: a sharp intellect, an ability to analye complex issues, express ideas forcefully, persuasively and respectfully, listen carefully and be open-minded on a range of issues,” he said.

About the situation in Iran concerning nuclear weapons, Ambassador Hoffman said: “The US would have no objection to the pursuit of a truly peaceful nuclear power programme by Iran. However, Iran is presently investing huge amounts in a uranium enrichment programme, even though it has world-class oil and gas reserves and no functioning nuclear reactors that would require nuclear fuel,” he warned.

The ambassador said that the only logical conclusion was that Iran was enriching uranium in order to pursue the development of nuclear weapons, and that the United Nations must impose sanctions to hold Iran responsible for its actions.

Ambassador Hoffman also spoke about North Korea’s recent announcement that it will rejoin the six-party talks on its nuclear weapons programme.

“We hope that North Korea will leave behind the path of confrontation it has chosen so far and ensure an entirely new and much better future for its people,” he said.