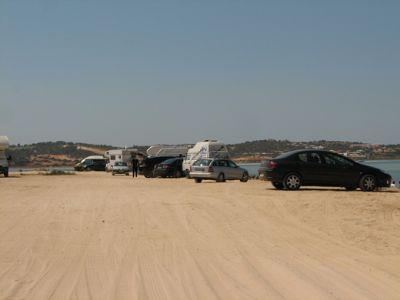 An environmental association has accused the authorities of doing nothing to stop the illegal parking of vehicles on the natural dunes in Alvor, in the Portimão council.

In a statement, the Algarve branch of the Liga para a Protecção da Natureza (LPN), the nature protection league in Portugal, says cars and motorhomes can be found parked during the day and overnight in the natural dunes, which are part of the Ria de Alvor estuary, integrated in the Rede Natura 2000, a European network of protected nature reserves.

“After several years denouncing this situation to the authorities, such as the regional hydrographic administration (ARH) and the maritime police, this area is still being disregarded,” said Gonçalo Gomes, president of LPN Algarve.

He says vehicles drive without restrictions around the area, destroying “essential” vegetation to keep the dunes stable and disturbing bird populations.

“People have created new tracks along the dunes to access the beach and leave rubbish everywhere,” he said.

“By turning a blind eye to this matter, the ARH, along with the maritime police, is showing total incompetence when it comes to enforcing the law that protects these dunes.”

A spokesman from the maritime police told the Algarve Resident: “If we witness illegal parking in the area, we act in accordance with the law, which is to identify the vehicle and its owner and send a formal notification to the ARH, which then takes legal action against the culprits.”

A spokesman for the ARH told the Algarve Resident that, although they will be looking at this case at a later date, now was not the time to comment as all energies are focused on assessing the stability of the Algarve’s coastline following the tragic incident at Maria Luísa beach in Albufeira.