Core Architects, an Almancil-based architecture firm, is celebrating after winning the ‘Best Architecture Single Residence’ accolade at the European Property Awards held in London for its work on the residential project ‘Casa Azul’.

The firm was even the only one in Portugal to receive the coveted five-star distinction.

In a statement, Core Architects describes itself as an office that “specialises in energy efficiency and sustainable buildings”.

On its website, the firm says that the Casa Azul project involved renewing an “old and forgotten gem of land, around a farmhouse, and adding an extension to create a contemporary house”.

“The plot extended over 5,230 square meters with olive, almond and orange trees dominating the landscape. Since the trees were very old and beautifully grown, the design of the extension was developed around the trees without needing to move or cut them,” it explains.

Core Architects also says that the client had two “important requirements”: to have ample living space within nature and a highly energy-efficient house with “maximum comfort but, at the same time, low running costs”.

The shape of the new building was a result of a bioclimatic study and a topographic survey.

The firm says that one of the main priorities when designing was to “respect the existing vegetation as it was seen as essential for good energy performance”.

Due to the solar and wind impact, the north façade was closed to keep out any unwanted cold winds. To the south, the building opened up like a fan thus creating an open living space and allowing direct sunlight to flood the house with natural light.

All rooms were oriented towards the sea and have an ocean view. The use of natural building materials, such as wood and green roofs, helped the house blend with nature. A natural, drinking-water pool further reduced the chemical impact on nature.

The use of the same natural building materials that were utilised in the original farmhouse (such as natural stone, wood and clay) connected the two opposing architectural languages of the building, Core Architects says on its website, adding that while the material blended with nature, the futuristic design set it apart from most natural buildings.

“By switching out a chemical chlorine or saltwater pool with an all-natural drinking-water pool, we were able to distribute the natural eco-system,” it adds. 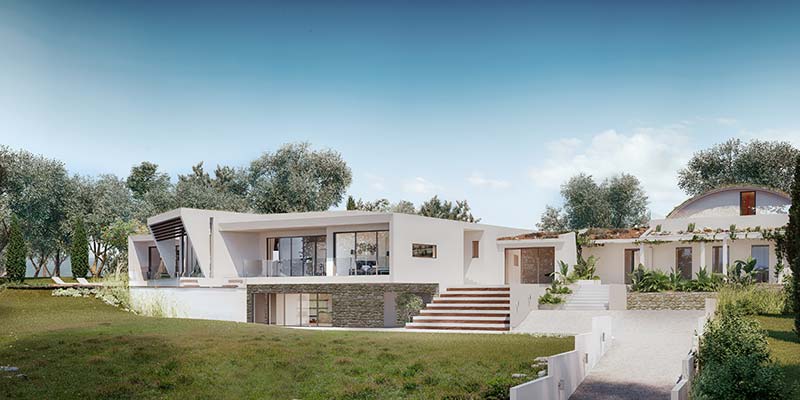