Portugal Resident
Home Original Alice in Chains to perform in May 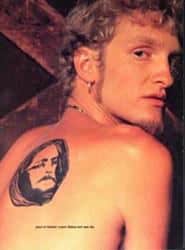 AMERICAN GRUNGE band Alice in Chains has announced they will perform in Lisbon on May 26, at the Super Bock Super Rock Festival (SBSR). The show will represent a rare outing for the group, who has made very few appearances since the death of lead singer Layne Staley, in 2002, from a drugs overdose.

Founded in 1987 with seven albums recorded, including a US number one in 1995, Alice in Chains ranked with Nirvana, Pearl Jam and Soundgarden as one of the bands that made Seattle famous in the early 1990s.

Surviving members, Mike Ines (bass), Sean Kinney (drums) and Jerry Cantrell (guitarist and vocalist) are the official band line-up for the Lisbon gig, but rumours persist that former Comes With the Fall vocalist, William DuVall, may shortly be signed to replace Layne Staley.

Also on the bill for SBSR this year are Tool, Placebo, Deftones, Korn and Within Temptation. See What’s On for more details.