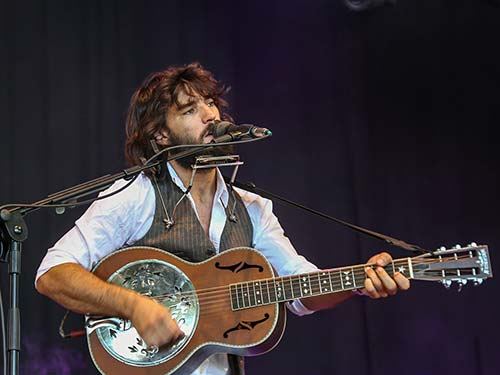 British-born Daniel Kemish claims he was “born on the wrong continent”.

Not because he doesn’t love his hometown of Southampton or the Algarve where he grew up, but because his love for Americana/Outlaw music from “across the pond” is so strong he’s dedicated his life to it.

After years of performing in bars and releasing two EPs, the 28-year-old is launching his debut album ‘Fools & Money’ on March 24 at Faro’s Teatro Lethes.

“I chose the Algarve (to launch the album) because it’s where I grew up and where I’m living now, though I’m always bouncing back and forth from here and the UK.”

“It just seemed like the perfect place to start my tour,” Kemish told the Resident.

Listening to his songs, it’s hard to believe he’s not singing them in some smoky American saloon in the 19th century.

Indeed, most of the songs are about “living on the road” and “not having a steady home”. Thus he believes this “outlaw, folksy” music style is perfect for him.

“I grew up with my parents listening to people like Kris Kristofferson and Johnny Cash. I think my love for this kind of American music just came naturally,” he said.

He told us he traveled to Nashville, USA to record the album “all in one day”, in an attempt to convey a “raw feeling” unlike many of today’s polished artists.

‘Fools & Money’ launches on March 25, though anyone who attends his pre-album release show can buy it a day earlier.

Tickets for the Lethes show cost €10.

He will play three shows in the Algarve – at Portimão’s Marginália Bar on March 25, at Loulé’s Bafo de Baco Bar on March 26 and in Carvoeiro’s square on June 18 – while also embarking on a UK tour in April and May.