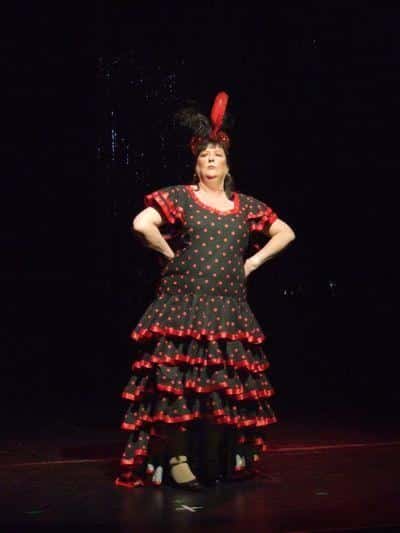 The Algarveans theatre group performed their winter production Algarveans X-Posed at the Lagoa auditorium on Monday and Tuesday night, raising around 4,000 euros for the Associação Oncológica de Faro, a regional cancer association.

The shows were performed in two halves, with the first dedicated to a hilarious pantomime starring a number of renowned fairytale princesses including Cinderella, Sleeping Beauty and Snow White as well as dwarfs, birds and other forest creatures.

Also making an appearance in the pantomime were the three little pigs as well as two horses, an attorney, a singing cobbler and, of course, two dames, as the ugly sisters.

The second half centred on a disco setting, with various funny and frightening acts including a dance rendition of Big Girls You Are Beautiful and an entertaining comedy monologue by British resident Chris Winstanley.

The grand finale of the show was a hilarious song by Sian Hughes-Roberts who will be acting out the life of the famous coloratura soprano, Florence Foster Jenkins in the theatre group’s next production in June. Florence’s hopeless attempts to sing captivated audiences and filled the Carnegie Hall, New York.

For more images please go to our Image Bank at Portugal Images by clicking the link on the right of this page.