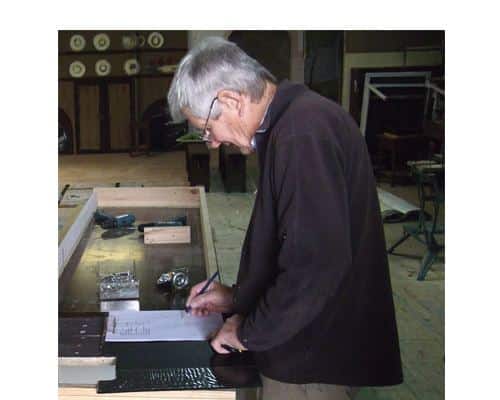 Down at the Algarveans’ warehouse, in a little known village called Senhora do Verde, is where the set building for the Old Time Music Hall production, Down At The Old Bull & Bush, is taking place.

Work is well underway by Dick Purssell who has a deadline to meet. He has been building sets for the Algarveans’ productions for several years now.

“Old Time Music Hall is steeped in tradition and when done properly never fails to make the audience laugh. And laugh they will at this one,” says Dick.

Dick is very non-committal about revealing who the show’s Chairman will be but is very happy to discuss past productions. This, of course, is no help in finding out who the Leonard Sachs-style Chairman is going to be.

He then busies himself with cutting wood and hammering nails, and it all starts to get noisy. Someone is bound to give the game away and let slip the Chairman’s name …

Down at The Old Bull and Bush Old Time Music Hall will be performed at the Teatro Mascarenhas Gregório in Silves on March 31, April 1 and 2.

Tickets can be booked via email algarveansboxoffice@gmail.com or telephone 966 211 634.